Take a sneak peek with this excerpt from the article: The Gulf Coast tick (Fig. 1), Amblyomma maculatum, was first described by Koch in 1844. Gulf Coast ticks are found in grass prairies and coastal uplands throughout much of the western hemisphere. The ticks are ectoparasites that feed on a variety of birds and mammals, and will readily bite humans. Gulf Coast ticks are of increasing concern because of their ability to transmit several pathogens of veterinary and medical importance. 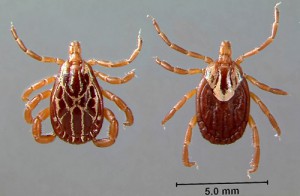