Take a sneak peek with this excerpt from the article: Apocephalus borealis Brues (the zombie fly) is a member of a specialized subgenus known as Mesophora. This subgenus parasitizes insects other than ants. Their typical hosts include bumble bees and paper wasps but they are capable of parasitizing many other arthropods. Apocephalus borealis recently has been confirmed to parasitize European honey bees, Apis mellifera sspp. along the West Coast of the United States as well as in South Dakota and Vermont. Recently, molecular analyses of honey bees from Belgium tested positive for Apocephalus borealis. These discoveries have stirred interest in both the scientific community and media due to an international interest in honey bee health. 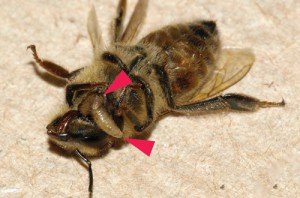 Figure 1. Two final instar larvae of Apocephalus borealis exiting a honey bee worker at the junction of the head and thorax (the larvae are arrowed). Photograph by John Hafernik from Core et al. (2012). Licensed under Creative Commons Attribution 2.5 via Wikimedia Commons.