Take a sneak peek with this excerpt from the article: The citrus snow scale, Unaspis citri Comstock, feeds primarily on the trunk and tree limbs of older citrus trees, feeding on plant juices (Russo and Longo 2004). The scale may also be seen on leaves and fruit, if the population is large enough. Early symptoms include reduced tree vigor and fruit production. With prolonged high population densities, the normal growth of the bark is prevented and the toughened bark is not able to expand and may become split or ‘hidebound’ (Russo and Longo 2004). 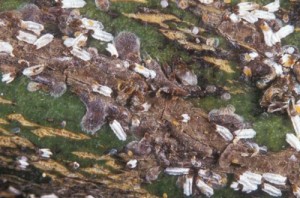