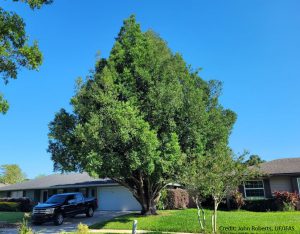 A mature nagi tree in a home landscape.

Human desires can be capricious and plants can fall in and out of vogue. Somewhat surprisingly, things as long-lived as landscape trees have different levels of merit based on the era of their planting. One tree, that was popular in Central Florida decades ago, fell out of favor, but is now enjoying renewed popularity is Nagei nagi – otherwise known as the nagi tree, Asian bayberry, broadleaf podocarpus, or nagi podocarpus. Although no longer classified as a “true Podocarpus,” it remains within the Podocarpaceae family, and is somewhat of a outlier of biogeography since this family tends to be more linked to the Southern Hemisphere. With lush, dark green leaves, it looks like a broadleaf or angiosperm or even a monocot like an orchid at first glance. However,

Comparison between the fleshy cones of yew podocarpus (left) and a nagi tree (right) – conifer “cousins” within Podocarpaceae. Note that some trees will produce these cones and others will not since both species are dioecious plants with separate genders.

these trees are more closely related to pines, cypresses, and yews of the conifer realm (i.e., Pinales). Another cool feature of plants within Podocarpaceae is that most plants are either female or male and cannot self-pollinate. The female nagi tree will eventually produce a fleshy fruit that is actually a cone, which leads to one of its names, “Asian bayberry.” Due to these fleshy fruits, angiosperm-like leaves, and reverence in Asian cultures – some have come to call it the “subtropical gingko.” Throughout its native range, large specimens are often considered to be sacred, particularly in Japan and Okinawa. In fact, “nagi” in Japanese means calm or serene, so the name of this tree may reflect cultural perceptions linked to the tree. 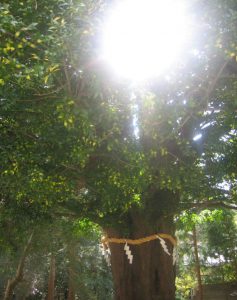 The Sacred Nagi Tree of Kumano Hayatama Taisha is a Natural Monument of Japan and was planted as a memorial in 1159 CE. The tree is almost 60 feet tall and 18 feet wide. Photo Credit: Jonathon Burman, Wikimedia Commons. 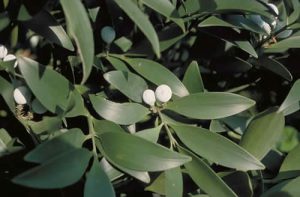 Foliage and mature fruit of a nagi tree. Credit: UF/IFAS 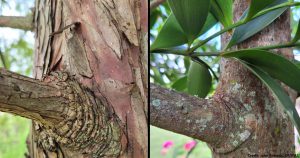 The nagi tree has been noted for its resistance to hurricane force winds. Note the pronounced branch collar of the nagi tree (right) relative to the bald cypress (left). The bald cypress is another conifer with strong branch unions, but unlike the nagi tree, has had enough research conducted on it to be rated within the strongest wind resistance category by UF/IFAS.

This tree can likely see more widespread use as a small to medium sized tree or even as a large hedge or border plant. They prefer sites with good drainage and regular rainfall, so most areas in Florida are favorable for establishment. However, it is relatively slow-growing. Like many other slow-growing plants, the nagi tree compensates with durability. Not enough specimens have been planted throughout Florida to be assessed in wind tolerance research, but based on anecdotal reports from horticulture/landscape professionals, this tree is considered to be one of the most storm-resistant selections available. This makes sense since these trees are native to the extreme eastern coast of Asia and nearby islands, the endpoint of the Pacific Ocean’s version of Hurricane Alley that is regularly battered by typhoons. These trees have been forged in an evolutionary crucible of cyclonic activity, and a tree with high wind resistance is almost always a welcome addition within the Florida landscape. This tree may potentially be the reigning world champion of wind resistance for its size classification (i.e., small to medium sized trees) – a claim that will have to be further assessed in future research. 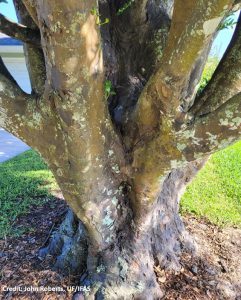 The bark of a mature nagi tree.

The nagi tree has a hardy constitution and tends to have few health problems – which can often be even more the case as many non-native plants have left their pest problems in their homeland. However, the nagi tree is not invincible, and like other members of Podocarpaceae, this plant can occasionally be susceptible to scales and aphids that lead to sooty mold. Another concern is drainage, as these plants prefer drier sites and have been known to succumb to root rot in areas with poor drainage. Aside from those issues, these trees are some of the most forgiving species for Central Florida and deserve much more use in our local landscapes as a perennial favorite. 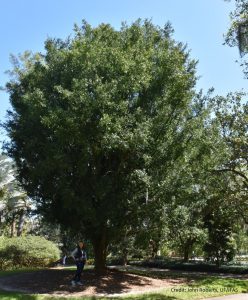 Resources and Other Links: