Heirloom Tomatoes: The Good, the Bad, and the Ugly (but almost always tasty)

A Primer on Growing Tomatoes

The tomato plant is a member of Solanaceae or nightshade family. A native of Central and South America, tomatoes have expanded geographically as they are also a well suited vegetable for temperate climates. Tomatoes pose an interesting challenge for gardeners in Florida. The flowers are stubborn and will typically only set fruit when daytime temperatures are below 85° F and nighttime temperatures range between 55 and 70°F. Summer is therefore out of the question (i.e., as it is for most vegetables), but big windows of Fall and Spring should be ideal for planting and maturation. However, these temperatures can still swing either way through these timeframes.

Hybrid tomatoes are created by plant breeders to merge the best qualities of two different lineages into one plant. For example, a plant with excellent disease resistance but modest production can be crossed with a plant with high production – the resulting offspring are “hybrids” and will ideally merge the disease resistance and high production of both parents into one plant. Hybrid offspring with improved qualities will be uniform in performance for that generation. Unfortunately, this process is often difficult to maintain beyond one generation, and the offspring of the hybrid are much less likely to have the combination of genes needed to perform as well as the original hybrid. Therefore, the seeds taken from hybrid fruit cannot be saved for reliable production. However, this is only an issue for growers that wish to save their own seeds from plants they produced (i.e., typically home gardeners). 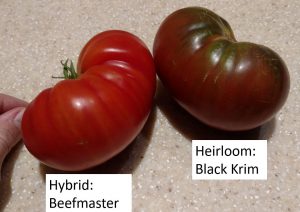 Another shortcoming of hybrids is that most research on tomato improvement has been focused on commercial production, and tomato producers are primarily concerned with overall yield and how tomatoes hold-up under shipping, packing, storage, and display. The genes for yield, firmness, and appearance are not the same as the genes associated with taste and aroma. So alternatively, the claim to fame for heirloom plants is that they have been chosen over generations based on taste since distance and time associated with “garden to table” is very short. Much less consideration has been given to heirloom cultivars with regard to marketable aesthetics (e.g., likelihood to blemish, consistent shape, uniform color, etc.) and prolonged durability (e.g., thicker cell walls, slower cell breakdown, etc.). In recent years, there has been growing interest in home gardening and the myriad of heirloom tomato cultivars available, some with near-mythic reputations for taste (e.g., Brandywine). There are perceptible differences in taste that vary from heirloom cultivar to cultivar, but preference is often in the tongue of the beholder. Another advantage of the heirlooms is their aesthetics. They come in many colors ranging through red, pink, orange, yellow, green, brown, purple and even striped or variegated (see below). 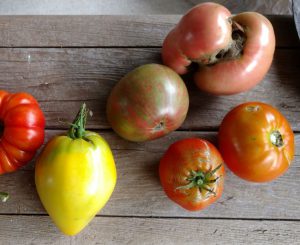 So, having detailed the drawbacks of the hybrids, it is only fair to return the favor for the heirlooms. Heirloom cultivars tend to be more prone to physical defects like catfaces and sutures (see above – upper righthand corner). These defects can impact yield if the tomatoes have formed particularly poorly, but oftentimes the deformities are only skin deep, with no impact on flavor or taste. Heirlooms have not had their genetics professionally curated and evaluated. Consequently, heirlooms tend to have more susceptibility to disease, lower production, and certain cultivars can be more “finicky” if growing conditions are unfavorable. This is why it is important to select heirlooms with qualities that can withstand our rainy, humid, and hot conditions that support high disease and pest pressures. An example from personal experience, “Lucky Tiger” was a not-so-lucky selection for Central Florida since it consistently split under the heavy rains that we receive (see below). 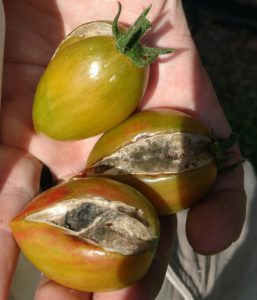 It may be best to stick with heirloom cultivars that have been tried and true by local gardeners for the area. Some examples of heirlooms that perform well in Central Florida include Cherokee Purple, Pink Berkeley Tie-Dye, Kosovo, and Stupice.

Seeing the renewed interest in plant taste, certain tomato breeders have tried to re-emphasize taste for commercial production. The result has been cultivars like Tasti-Lee™ and further research into the next great tasting tomato available in the grocer’s section (http://explore.research.ufl.edu/tasty-tomatoes.html + https://blogs.ifas.ufl.edu/news/2019/08/21/uf-ifas-researchers-close-in-on-a-tastier-tomato/). The research focus on tomato taste improvement is still rapidly expanding (e.g., http://www.fruitnet.com/americafruit/article/179540/researchers-look-to-improve-tomato-taste + https://hos.ifas.ufl.edu/public/kleeweb/newcultivars.html). Some of the seeds of these varieties (i.e., Tasti-Lee™) are also available to home gardeners. Not to be outdone, heirlooms are also being improved. In order to meet the demands of modern gardeners, these “designer” tomatoes have become the labradoodles of the vegetable gardening world. Often times, this is done by crossing two cultivars with certain well-known traits. Brandywine is a well-known tomato for taste and its unpredictable (often disappointing) yields, but its consistency has been improved by crossing it with a publicly unknown parent (i.e., a trade secret) – resulting in “Brandy Boy.” Two heirloom cultivars can also be crossed, which is the case with Cosoluto Genovese and Brandywine to produce “Genuwine.” However, just like the hybrids, the offspring of the heirloom crosses will likely have an unpredictable array of outcomes.

Having dived headfirst into the world of home tomato production, my curiosity for trialing different tomatoes has only grown. I will say that there may be some basis for some of the “stereotypes” for both heirlooms and hybrids. For example, hybrids (e.g., Beefmaster, Celebrity, Mountain Magic, etc.) seem to produce more abundant and consistent yields, while some of the heirlooms tend to produce fruit with regularly high-quality taste. In my own opinion and experience, Berkeley Tie-Dye Pink, Dester, and Black Krim have produced tomatoes of excellent flavor. The palette of colors and tastes are undoubtedly greater with the many heirloom cultivars. However, many of the hybrid plants also produce great tasting tomatoes, and I would be surprised if much detectable difference can be found between most heirlooms and hybrids through blind taste tests. Ultimately, freshness is often the best ingredient, and residential gardeners cannot go wrong with any type of plant that is pumping out the tomatoes. 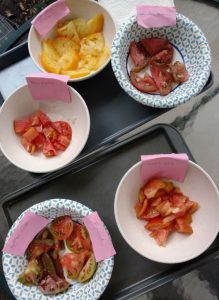