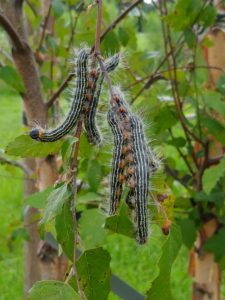 The yellownecked caterpillar (Datana ministra) recently invaded the newly planted river birch trees in the Exploration Gardens. Related to the azalea and walnut caterpillars, the yellownecked caterpillar has a wide range of host plants, including fruit trees, maple, elm, oak, hickory, and azalea. It gets its name from the bright orange-yellow segments behind its head. The adult moth appears in June/July and lays eggs in clusters on the undersides of the leaves. The larvae feed gregariously for 4-6 weeks. Young caterpillars skeletonize only the leaves where mature ones leave only the petiole. When disturbed, the caterpillar lifts its head and tail in a defense mode.

There are several natural enemies that attack this pest. Birds feed on larvae and predaceous bugs, and parasitic flies may also attack them. An insecticide can be applied, but the infestation in the Exploration Gardens lasted about 1 ½ weeks and the river birch affected are already growing new leaves.

← Ouch! Watch Out for the Venomous Puss Caterpillar
Flowers for Fall Color in the Landscape →