“From my youth on,” writes Italo Calvino, “my personal motto has been the old Latin tag, festina lente, “make haste slowly”.

The original form, σπεῦδε βραδέως (speũde bradéōs), is Classical Greek, of which festina lente is the Latin translation. This notorious sentence captures the idea that the best time to slow down is when you are in a hurry: that is, “festina lente”, hasten slowly.

As we enter the 2022/23 academic year, my wish is for students to be inspired by this motto. I wish them to learn how to slow down to know themselves, the people around them, and the community they live in. I also wish them to hasten to seize all the learning (and life) opportunities that may come their way.

Calvino talks about his personal motto in his book Six Memos for the Next Millennium (“Quickness”, p. 48).

Six Memos for the Next Millennium is a series of talks that Calvino was to deliver over the course of his Norton lectureship at Harvard in the fall of 1985, but never did as he died before leaving Italy. Five of the projected six lectures – he favored “memos” for its hints of casual ease – were completed. In there Calvino addresses the attributes he would most like to find in the literature of the next millennium: lightness, quickness, exactitude, visibility, and multiplicity. (The sixth lecture, which he never got to write, would have been on “consistency”). Although Calvino’s intention was not “to talk of futurology” but of literature, I believe that Six Memos can be valuable in many different aspects of life.

How could students use these qualities in their college life? I choose some passages from the text that may bring some inspiration:

“Whenever humanity seems condemned to heaviness, I think I should fly like Perseus into a different space. I do not mean escaping into dreams or into the irrational. I mean that I must

change my approach, look at the world from a different perspective, with a different logic and with fresh methods of cognition and verification.”

“In an age when other fantastically speedy, widespread media are triumphing, and running the risk of flattening all communi­cation onto a single, homogeneous surface, the function of liter­ature is communication between things that are different simply because they are different, not blunting but even sharpening the differences between them, following the true bent of written language.”

“If now the element under observation is exactitude itself if one isolates it and allows it to develop, if one regards it as an intellectual habit and a way of living and lets it exert its exemplary

influence on everything that comes into con­tact with it, the logical conclusion is a human being with the paradoxical combination of precision and indefin­iteness.”

“If I have included visibility in my list of values to be saved, it is to give warning of the danger we run in losing a basic human faculty: the power of bringing visions into focus with our eyes shut, of bringing forth forms and colors from the lines of black letters on a white page, and in fact of thinking in terms of images.” 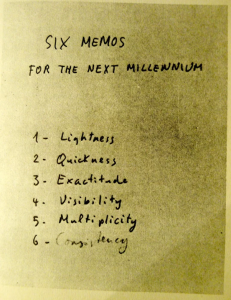 “Who are we, who is each one of us, if not a combinatorial of experiences, information, books we read, things imagined? Each life is an encyclopedia, a library, an inventory of objects, a series of styles, and everything can be constantly shuffled and reorder in every way conceivable”.

Calvino chose the title for the sixth, “Consistency,” but died before he wrote it. What would have been Calvino’s last address for the Harvard Eliot lectures? Evidently, this was not up to him. Perhaps the sixth memo, if written in the new millennium, retroactively would have tied itself to the five written in the last. And consistency can be a pivotal quality in literature as in life. Will Durant wrote in the chapter about Aristotle and Greek Science: “We are what we repeatedly do. Excellence, therefore, is not an act but a habit”.

I found Calvino’s Six Memos for the Next Millennium while I was packing up my office – in a couple of weeks it will be my last day at the One Health Center of Excellence. Since my first day at the OHC, almost exactly five years ago, I have carried this little text around with me for inspiration and guidance. I read it for the first time in original Italian when I was in high school, I still remembered how suggestive reading it was. In a way, Six Memos has been my personal motto, and I hope it can be of some inspiration to students who are taking on this new academic year.

Durant W. (1926). The Story of Philosophy: The Lives and Opinions of the World’s Greatest Philosophers. Simon & Schuster: ch. 2 “Aristotle and Greek Science,” sec. 7 “Ethics and the Nature of Happiness”.