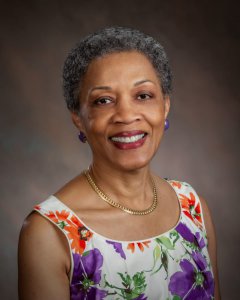 As the first black female graduate student and one of fewer than five full time registered female graduate students in Entomology in 1969-72, Pauline Lawrence became keenly aware that field and extension experiences were not readily available. However, her involvement in the Ministry of Agriculture in Jamaica, coupled with field trips (part of the Entomology department’s coursework) to the UF/IFAS Tropical Research and Education Center (TREC) in Homestead, Florida, reinforced the value of incorporating academic and fieldwork into her graduate experience. Consequently, under the caring and supportive tutelage of Dr. Richard Baranowski, she pursued her Ph.D. research at TREC, combining physiology, behavior, and ecology with studying tropical fruit fly pests and their biological control agents.

Dr. Lawrence was the first female UF Entomology graduate student to live on the TREC campus. The enriching experience and supportive environment fostered by Dr. Baranowski and other faculty and staff at TREC reinforced her belief in supporting graduate students financially and physically while fostering a positive learning environment within a cross-disciplinary framework. Such integrative experiences are essential because graduate students have been, and continue to be, at the very core of advancing innovative approaches to solving diverse agricultural problems. To that end and in recognition of her outstanding experience as the first resident female entomology graduate student on the TREC campus, Dr. Lawrence and her husband Dr. Carlton Davis (Distinguished Professor of Food and Resource Economics, UF/IFAS, Retired) made a significant donation to the 2019 TREC Student Housing Campaign that will provide living accommodations for future graduate students.

Pauline Lawrence spent 35 years teaching and researching at the University of Florida. After earning a bachelor’s degree (with Honors) in 1969 from the University of the West Indies in her native Jamaica, she was awarded an academic scholarship by the Government of Jamaica to pursue a Master of Science in entomology at the University of Florida, in the then College of Agriculture (now College of Agricultural and Life Sciences), graduating in 1972. She later became a “Double Gator,” earning a Ph.D. from the same department in 1975. Dr. Lawrence joined the UF Zoology department as an Assistant Professor in 1976 and attained the rank of Full Professor in 1989, where she continued to teach and conduct research until 1993. In 1994, she joined the UF/IFAS Entomology and Nematology Department as a Professor of insect physiology and biochemistry and continued her research, teaching, and international activities until she retired in 2011.

Dr. Lawrence is a member of the Phi Beta Kappa honor society. She received an Excellence in Teaching award from the College of Liberal Arts and Sciences UF (1988-89), Distinguished Faculty Award from Florida Blue Key (1998), Outstanding Service Award from the UF Foundation Board of Directors (2003), and other awards from the UF Athletic Board and Sponsored Research programs. She won several national competitive grants for her research on the physiology and molecular biology of parasite-virus-host interactions from the National Science Foundation (NSF) and the U.S. Department of Agriculture (USDA). She was awarded a National Science Foundation Career Advancement Award for Women (1988-89). In 1999 she was selected as the Pioneer Lecturer Honoree by the Florida Entomological Society and served in various elected leadership positions and on the Governing Board of the Entomological Society of America.

In August 2019, Dr. Lawrence was honored with a Lifetime Achievement Award from Florida’s Girl Scouts of Gateway Council, that recognized her various contributions in support of girls, as well as her service as a past member of the Board of Advisors to the Florida Girl Scouts and also as a 1992 recipient of the Girl Scouts’ Women of Distinction award.

Dr. Lawrence recognizes the importance of basic research as an essential underpinning of every aspect of applied science. Consequently, she established an endowment in the UF/IFAS Department of Entomology and Nematology to provide scholarships for graduate students,. For more information, go to https://www.uff.ufl.edu/giving-opportunities/008337-pauline-o-lawrence-endowment/.