Amegda Overman was a nematologist and among the first women employed as a scientist by UF/IFAS. 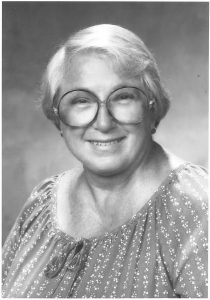 In 1945, Ms. Overman took a position as a soil microbiologist with the Gulf Coast Research and Education Center, (GCREC), then located in Bradenton. At the time, she possessed a bachelor of science degree from the University of Tampa. She later earned a master’s degree from the University of Florida and remained with GCREC for 45 years, retiring as a full professor in 1980.

During her career, Overman researched damage caused by nematode worms on ornamental and vegetable crops. She did extensive work on the ecological management of nematodes and other soil-borne pests.

Perhaps her most significant accomplishment was contributing to the development of plasticulture (using plastics in agricultural applications) production methods suitable for outdoor-grown vegetables in Florida; the methods she helped devise are now used statewide.

In 1997, she became an honorary life member of the Soil and Crop Science Society of Florida.