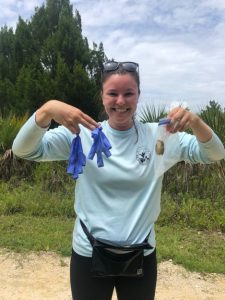 I had the pleasure to intern in the Crystal River National Wildlife Refuge (NWR) office. I essentially broke up my internships into two parts, the first part was my original time frame where I did a little bit of everything for the refuge and office. The second part came after I received an extension on my internship where I was specifically kept on for a new project. 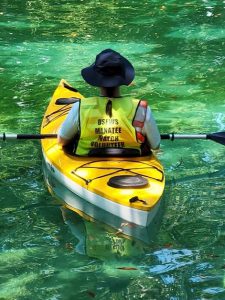 A Day at the Springs

My main stomping grounds was at the lovely Three Sisters Springs (TSS) where I helped monitor the shorelines and any manatee in the area while educating the public and reminding them of our rules. This became my main task as I kayaked out to TSS or worked on the boardwalk for more interpretive work. While I was out at TSS I conducted capacity surveys and counted every person and vessel in the springs every hour on the hour. This later was inputted and analyzed to find out peak hours of activity and if people were following our rules or not. Some days if an injured manatee was reported I would paddle through the Kings Bay area and search for them. I would stay with the manatee and monitor their behaviors, looking for breathing issues, any fresh scars, and if the manatee were able to dive down and eat or come up to breathe. A manatee in distress mostly meant that the manatee was listing to one side or had trouble with their buoyancy. 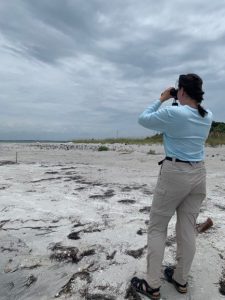 Come Fourth of July, we expected peak capacities much like Memorial Day weekend. To our surprise, the rain drove out the lots and our numbers were not what was expected – but that’s science! My team used a high contrast disc called a Secchi disc to be placed in the water and move away from the disc horizontally until it vanishes. This vanishing distance was the measurement used to interpret the spring’s turbidity. We planned out four sample periods for the Secchi disc surveys and water sampling. At the same time, we set out a trail camera to passively take capacity surveys every hour during the eight days of sampling. Currently, I comb through the footage matching people to see how long they stay in the springs. The things you see when people don’t remember you’re watching! The best part about this project is that I know it will help implement new management decisions at the refuge. Knowing I have a small part in that impact makes all of the hardships worth it! I am so thankful for UF NCBS for setting me up with such a wonderful internship. 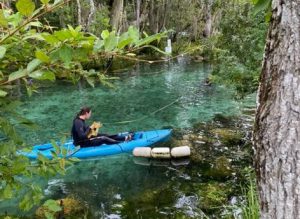