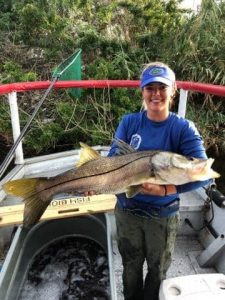 Florida is home to the world’s highest density of springs and the largest springs by volume (Force 2000). A key feature of Florida springs is their relatively stable year-round temperatures provided by the groundwater that serves as the rivers’ base flow. The Homosassa River is a unique spring-fed system with a direct connection to the Gulf of Mexico. The connection between the two water bodies provides a warm water refuge where species, like the Florida manatee, seek shelter when Gulf of Mexico temperatures decline during winter months.

In the Gulf of Mexico, coastal water temperatures regularly fall below 12°C, which approaches a lethal threshold for many tropical and subtropical fishes. The use of spring-fed rivers as a thermal refuge has been well-documented for the Florida Manatee, but the use of these same spring-fed rivers by marine fish species has received little investigation. The Springs Coast Fish Community Assessment project is a cooperative project between the Florida FWC and the University of Florida. This project will evaluate seasonal habitat use of springs by marine species, and impact to habitat use by resident freshwater fishes. The Homosassa Project uses acoustic telemetry, electrofishing, mark-recapture, habitat assessment, and abiotic measurements to investigate seasonal abundance shifts in temperate spring-fed rivers. 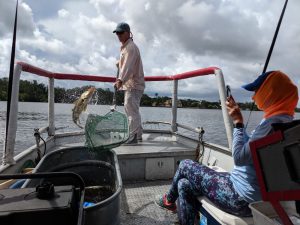 We hypothesize that marine fish are overwintering in the river potentially causing predation and competition with native freshwater fishes. Further, the use of freshwater springs by marine species may provide critical thermal refuge habitat during winter for tropical/subtropical fishes like snook. Knowing drivers that prompt movement of marine fishes into spring-fed rivers can allow managers to determine the amount of groundwater needed to maintain those conditions and adequately set minimum flow and level regulations that protect freshwater fishes and their environment.

Preliminary data suggest common snook and mangrove snapper move into the river system begin around October. We have also witnessed the accumulation of freshwater species in backwaters during peak winter month migration. Understanding the movements and fish habitat will assist resource managers in implementing strategies that may protect or enhance aquatic habitat for resident freshwater fish species while providing potentially critical refuge for marine species that utilize this system. 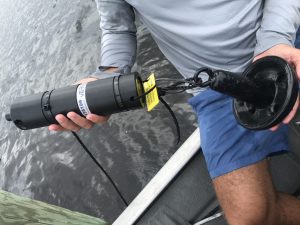 Kicking off the Homosassa Project, biologists have deployed an array of acoustic receivers from springhead to the Gulf of Mexico, to track the movement of Largemouth bass, Bluegill, Gray Snapper, and Common Snook throughout the mainstem and backwaters of the Homosassa River system. The team of biologists aims to identify the timing of the winter marine species influx and the subsequent interactions with native freshwater fishes in this river system. The project also aims to document any exchange between adjacent systems – Chassahowitzka and Kings Bay/Crystal River Complex to further inform how spring-fed rivers function as habitat for the selected species. 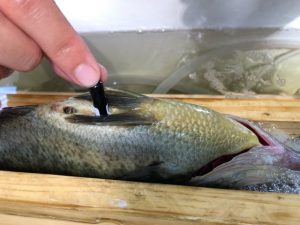 Biologists studying fish movement began implanting internal acoustic tags on freshwater fish in the Homosassa River System. 20 Redear Sunfish and 20 Largemouth Bass have been tagged, all fish with internal tags have been marked using external yellow dart tags. Biologists will monitor the fish over the course of a year to record movement patterns between the main river and backwaters. This data will be used to better understand species interactions and habitat associations of fish species in the Homosassa River.