Seagrass is one of our most valuable resources in the Nature Coast. From fisheries to water quality, seagrass meadows contribute to productive and beautiful coastal waterways. But, unfortunately, we are losing seagrass in many areas of Florida and the Nature Coast is no exception. Recent mapping suggest declines in seagrass coverage and increases in seagrass fragmentation. While water quality is the major driver of declines, another leading cause is damage by anchors, propellers, and boat hulls.

Over the past several years, a group of researchers and extension agents at UF/IFAS have been working to address this damage, also called seagrass scarring. We have been investigating ways to protect seagrass and restore scars. This work includes research and pilot tests of restoration techniques, a fair bit of boater education, and installing navigational aids in two zones. The boater education and navigational aid portions of the project aim to help boaters be their best! 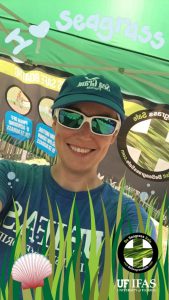 This past summer, two dedicated interns worked to complete 200 combined hours of boater outreach. Interns directly educated 897 boaters during their time at boat ramps! About 185 boaters (20.6%) signed a pledge to practice seagrass safe boating. Each boater received a weatherproof sticker and an educational handout about seagrass scarring. Several boaters put the sticker right on their boat immediately!

Outreach booths included a photo frame and information about bay scallops. In addition, a new Snapchat GeoFilter (shown left) covering the boat ramp and adjacent canal was available to boaters every outreach day. The GeoFilter was used by about one quarter of the users who saw it in the app. These Snapchat users generated 2,738 views of the filter within their networks! Pretty great multiplier effect! 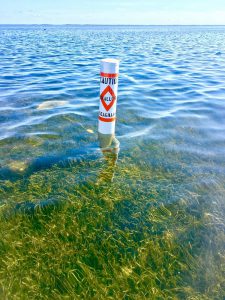 Another major effort was placing more than 30 seagrass warning buoys to serve as navigational aids for boaters. These warning buoys are just helpful markers out on the water – they do not restrict boating access in any way. The markers help visitors and locals alike by serving as a reminder of shallow areas and the seagrasses that lie beneath. Seagrass marker buoys are currently protecting seagrass meadows at Sandy Hook key and along Fish Creek, both popular boating areas in Citrus County. We conservatively estimate that these buoys are increasing protection for at least 92 acres of crucial seagrass habitat.

Next summer, we will be back at it with more boater education so keep an eye out for us and remember to be seagrass safe!