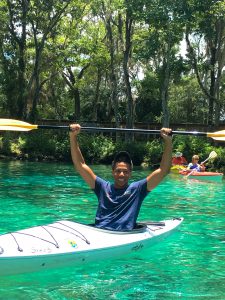 Seagrass Seagrass Seagrass. Let this permeate your mind till all you think about is that sweet, sweet seagrass waving around gracefully in the ocean currents. What’s that there?! It’s a male sea horse with all his babies and oh look over there! There’s a juvenile green sea turtle and a few scallops peering back at you with their sapphire blue eyes. You struggle to take in all the life that makes a home in this fragile ecosystem then WHAM! A boat comes flying through tearing up the seagrass and leaving destruction in its 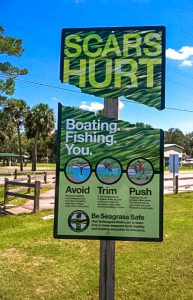 wake. This is referred to as seagrass scarring and recreational boaters have quite the knack for it all along the Nature Coast. Luckily most boaters are just unaware of the problem. All they need is an effective educational campaign mixed with a little outreach, and before you know it you’ll have a bunch of seagrass-safe boaters. However, before you can implement an educational campaign data needs to be collected via carefully worded surveys. That’s where I came in this summer along with my coworker Kim Magee! We conducted a total of 300 boat ramp surveys at three locations: Steinhatchee, Cedar Key, and Crystal River. I had the pleasure of interacting with such a large variety of people; with some seeming genuinely concerned and eager to learn what they could do to help, while others could not be more indifferent to the situation. This is why preliminary ground work is so important.

The other set of surveys were conducted in Kings Bay and Homosassa Springs and focused on the scallop shell and guts dumping issues that have plagued the area. The primary issues are people 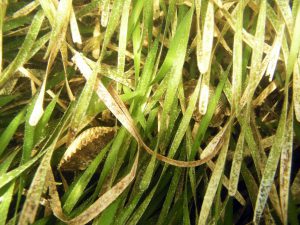 cutting their feet on them (LIKE RAZOR BLADES!). These surveys were much more relaxed than the boat ramp surveys because we were able to cool off in the springs when we got too hot and getting to kayak is just more fun than standing at a boat ramp. Also, whenever a storm was rolling in I would yell “I feel alive with the wind at our backs and the salt in our faces.” Although, we only had to collect 45 surveys from each location it was clear that more people acknowledged scallop shell and gut disposal was a severe problem than boaters though seagrass scarring is.

A diversity of summer experiences 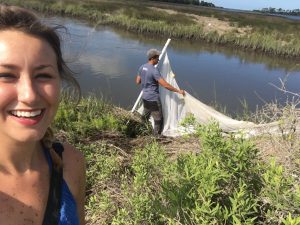 While I was primarily hired for the human dimensions project I could really only ever work on the weekends. In order to get my full hours I had the opportunity to assist with many other projects. One was working with graduate student, Emma Pistole, on her Snook genetic sampling research project. The project has the goal of determining if the northern population of Snook in the Gulf are different enough genetically from the southern population that different regulations would have to be applied to each group. I was only able to help a few times but I quickly learned how difficult seine netting can be. Each location was always exceptionally muddy and more often than not it always felt a lot more like quick sand (YAAAAAY!). Working with Emma was great because I was able to learn so much. She was always willing to answer any questions we had and was so eager to teach us.

I also assisted Dr. Mark Clark with his living shoreline project which wanted to rebuild the Joe Rains beach in order to combat erosion. Here I helped plant Spartina alterniflora and S. patens in different experimental plots which will be consistently monitored. Working in the heat was a real struggle, but the homeowners of the adjacent property, Bill and Peggy, were exceptionally helpful and friendly. They always asked if we had enough water and sometimes even provided lunch! I’m hoping to see the other locations that Dr. Clark wants to incorporate into the living shoreline project come to fruition. 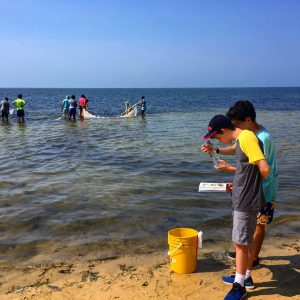 The third project I was able to work on was SeahorseU with Kate Hellgren. I really enjoyed this project specifically because I firmly believe in the positive effects that environmental education can have. I do not think that every child needs to be absolutely inspired to become a conservationist but if their interest is peaked, if they become more aware of the natural world, if they understand our impact then that is a major success. I loved watching how Kate interacted with all the children that came. Her excitement was absolutely contagious and opened up the kids (and me) to learning. I am very thankful for the Nature Coast Biological Station for providing this internship because not only can I say I developed new skills, when asked if I had a good summer I can definitely say yes.