The Kids Are Alright

Sometimes the most important gift someone can receive is a goat.

Nassau County 4-H and Farm Bureau are happy to make our community’s tomorrows better than their yesterdays. 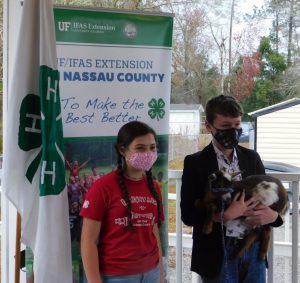 4-H has it’s roots deep in agriculture and although over the 100 plus years it has transformed into a program offering projects in just about everything…there’s still something special about your first animal project.

In January, a new 4-H family approached our office with questions on how to get their special needs youth, Garrett, involved in the dairy goat program. This conversation continued as we got to know the whole family better and got started making plans to get his 4-H career up and running. What we later heard were Garrett’s tales of being heavily bullied, financial hardships, severe illnesses, and a lack of feeling like he belonged in the community. Knowing these details, Ms. Kelsey reached out to the Nassau County Farm Bureau to coordinate efforts and sponsor a new dairy goat for this youth. The Farm Bureau board quickly agreed to sponsor this special effort. With fiances in place, the team began the search for the perfect doe.

A long-time 4-H family, Casey and her daughter Sayde, joined the efforts to find Garrett’s new doe. They agreed to pick her up and even de-bud her so that he would be safe from any horn injuries. Within a few weeks this young man’s dream started to become a reality. Farm Bureau, Nassau 4-H, and the family agreed that we should commemorate the occasion with a presentation ceremony. At the end of the day it really wasn’t about giving a young man a goat, but rather making him know that he belongs and is cared for.

The night before the ceremony Ms. Kelsey received a phone call from the 4-H volunteer. The little doe was underage, underweight, and struggling to eat. They had been putting every effort into helping her thrive but it was beginning to look futile. The two families then communicated and came up with the most amazing solution. The young 4-H’er, Sayde, had opted to give Garret her own home-bred, show goat that she was going to exhibit in the fair.

“Momma, we can’t give him this goat. Let him have mine instead.” Syade’s generous decision seemed to come quickly and easily because she wanted him to have a quality animal and good 4-H project. 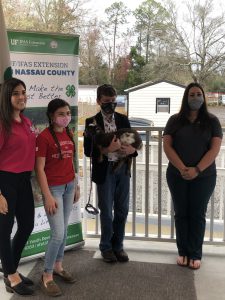 The morning of the presentation ceremony was rainy but everyone was still in good spirits. The local newspapers arrived to capture this special moment. Andy Toelle, the 4-H Northeast District RSA, Meg Mcalpine the Nassau County CED, members from the Farm Bureau board, Ms. Kelsey, and Jenessa Reed of the Farm Bureau’s women’s committee welcomed the families. A short speech was given then followed by Sayde personally handing over her goat, Ariat, to her new owner.

With teary eyes it was said: “We know feeling a sense of belonging is hard these days. With this goat we want you to know that you belong, your future has promise, and that you have this community to support you. We want to make your tomorrows better than your yesterdays.” 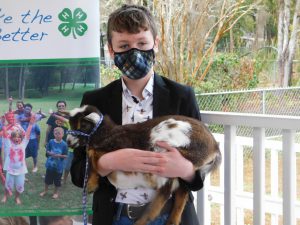 As of this afternoon we have received word that Garrett and Ariat have grown close and enjoying their new friendship. The original doe, now called Charlie, is still being nursed by Sayde in hopes she can show her in the October fair.

I am one of the 4-H Youth Development Agents here in Nassau County. My focus areas include: Animal Science with specialty in horses, Environmental/Wildlife Science, STEM and Emergency Response.