You may have paddled past a turtle sunning itself on a rock along a Florida river or witnessed a gopher tortoise crossing a backcountry road. We appreciate them in their natural habitats today, but what many don’t realize is that these reptiles were once highly sought after to make turtle soup. Diamondback terrapins were a fashionable delicacy in the early twentieth century. They were consumed in soup cooked with sherry. Fortunately for the terrapins, the market for terrapin soup dropped drastically because of the prohibition of alcohol in 1920. Thus, this was the beginning of the decline of turtle soup for North America. Today, most species are protected and surviving in their respective habitats. If you’re fortunate enough to witness one of these animals, here are a few ways you can identify if it’s a turtle, tortoise or terrapin. 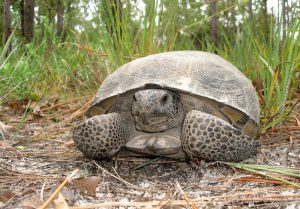 Gopher tortoises (Gopherus polyphemus) seem like your average tortoise, but for Florida they are a keystone species, which means other animals depend on them for survival. They dig out long burrows they share with over 350 other species. They often live in more than one burrow and spend approximately 80% of their time underground. There are many reports of beach-goers witnessing gopher tortoises walking into the water at the beach. If you happen to see this occurrence, please do not pull them out of the water or touch them. Gopher tortoises and their burrows are protected because they are listed as a Threatened species in Florida.

Therefore, next time you’re at the beach soaking up some sun and see a friendly gopher tortoise perusing by, please don’t put it back in the water thinking you are saving a sea turtle. Gopher tortoises can’t swim!

Sea turtles, live the opposite lifestyle of gopher tortoises spending their whole life in the ocean. Females only ever 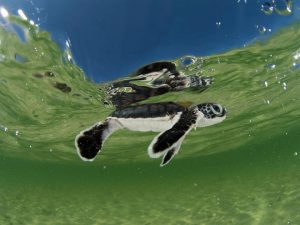 come onto land to lay their eggs on coastal beaches. Once the eggs hatch, tiny sea turtle hatchlings emerge from the sand and make their way to the water’s edge. These are the only two times you might see a sea turtle on land. Compared to gopher tortoises, sea turtles have lobed flippers adapted for swimming underwater and don’t have pronounced claws because they don’t need to dig burrows. All species of sea turtles in Florida are protected under the Endangered Species Act, therefore you should never handle one if seen on the beach.

The diamondback terrapin (Malaclemys terrapin) looks similar to their freshwater relatives but can easily be identified by spiral patterns on their shells and dark spots on their bodies. They are the only species of turtle that is found in the brackish waters of coastal marshes and estuaries.

You can help FWC determine Gopher tortoise populations by reporting your sightings using their App. http://myfwc.com/wildlifehabitats/managed/gopher-tortoise/app/.