Over the past year I have been hearing from clientele in the upper and lower Keys about a thick webbing on their plants. At the October 2014 Big Pine Key October Plant Clinic I received a sample of three pumpkin seed like structures with webbing. After contacting the University of Florida Insect Identification Lab http://entnemdept.ufl.edu/insectid/index.html with photos. It was determined to be a Colonial Tentweb Orbweaver Spider . If you see a line of egg sacs like in the picture below, then you may have the new spider on the property. The biggest complaint with this spider is the thick webbing.

According to the University of Florida fact sheet: “multiple observations have been reported of leaf loss, terminal twig dieback, and sometimes plant death, allegedly due to asphyxiation of the plant, where heavy populations of this spider have become established (Levi 1997). It has been proposed that the extensive web cover absorbs the sun’s radiation and raises the temperature, causing the leaves and young fruit to desiccate (Cárdenas-Murillo et al. 1997). This seems unlikely per se, as the white silk would seem to reflect sunlight rather than absorb it. A suggestion worth investigating is that the density of the webbing might restrict air flow over the leaves, with the same result of raising the temperature (Richard Weaver, personal communication 2003). Palms seem to be resistant to the damage caused to plants with small leaves.

Originally became an invasive exotic spider that moved into Miami-Dade County in 2000. Now it has been documented to be in the Florida Keys. 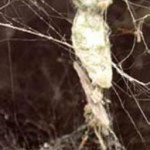 One Comment on “New Spider found in the Florida Keys”