Miami-Dade is ranked the number one county growing beans in both the Florida state and accross the country. More than 11,000 acres per year were grown in the field. However, a severe outbreak of red node disease caused by tobacco streak virus (TSV) in snap beans has occurred in a number of fields this year, which resulted in significant yield losses (Figure 1). Some growers have to completely destroy their crops by disking the fields without harvesting at all. The efficient control and management of the such fatal disease is very challenging 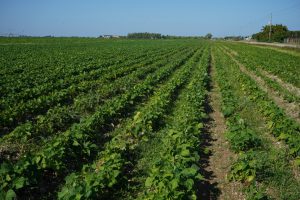 to the local growers. Thrips, as known, is a vector for the disease. However, a lack of efficacy in chemical control or IPM is critical because of the insect resistance. Growers are frustrated and struggling against this disease, which is severely threatening the local vegetable industry of the county.

Red node is not a new disease but it has never been so severe as such in this growing season. Red node is caused by Bromoviridae, genus llarvirus with species of Tobacco Streak Virus (TSV). A large number of plants are good hosts for this virus, such as cotton, dry beans, sweet clovers, asparagus, cucurbits, cowpea, tomato and weeds including wild mustard and thistle. It has been reported the incidence of the disease in more than 26 countries with over 200 plant species. As known, western flower thrips (Frankliniella occidentalis), and onion thrips (Thrisps tabaci) are major vectors transferring such virus. Therefore, it is critically important to control these thrips by a collaboration with surrounding growers in the same or different commodities because of a large number of hosts for these thrips.

Symptoms of the disease are reddish discoloration of nodes at the point of attachment of leaf petioles to stems (Figure 2). In severe cases, infected plants will flex or break at a discolored node. The veins and veinlets of i 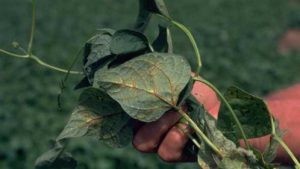 infected leaves exhibit a red to reddish-brown streaking. It may appear red to reddish-brown concentric rings on pods, which become shriveled or puffy and do not produce seeds. Plants can be severely stunted (Figure 3) and killed by the virus (McAvoy, 2014). Environmental factors may also contribute the incidence of the red node disease. As reported from India on cotton, with a minimum temperature 73 oF, moisture 82%, and leaf wetness 24 hrs, the plant disease incidence reach as much as 31% (Vinodkuma et al., 2017). 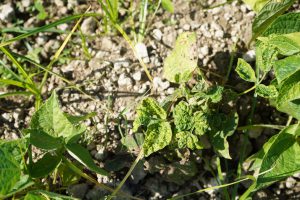 To control the red node disease, IPM approaches are necessarily essential, including physical, cultural, and chemical practices. Biological control has yet been developed so far. The practices include some cultivars with resistance to TSV as a genetic approach if available. Seeding with pathogen free seeds is important as a cultural control (McVoy, 2014; Zhang, et al. 2017) because seed transmission has occurred in beans, chickpeas and weeds, and spray appropriate insecticides to manage thrips. Chemical control of thrips is still inefficient, and more efficacious insecticides need to be developed. However, spraying certified insecticides for beans, such as Radiant (spinetoram), Movento (spirotetramat), and Exirel (cyantraniliprole) with rotations to suppress the population of thrips is required to reduce the resistance of the insects.

Dr. Qingren Wang is currently an Extension Agent II in Commercial Vegetables and Pesticide Applicator Training, he is a soil scientist, working on research in soil management, cover crops, cropping systems, and environmental science for over 30 years.