Farmers, ranchers, nursery growers, and other agribusinesses face difficult challenges in keeping their operations profitable, especially through hazardous weather events. UF/IFAS Extension offers resources for agribusinesses in reporting damage, recovering, and preparing for the future. Additionally, to help inform the public and policy-makers, UF/IFAS Extension conducts agricultural damage assessments after storms and other natural disasters. The Tropical Storm Eta assessment in Martin County finds that agricultural producers experienced damage primarily from flooding and excessive rainfall, with some wind damage to structures and crops as well.

The Rainfall Before the Storm

In early November, Tropical Storm Eta’s meandering, lingering path added to our rainfall excess. On Monday, November 9, TC Palm reported: “With as much as 3 ½-inches recorded in some areas Sunday, Martin County recorded the highest rainfall totals on the Treasure Coast”.  Rainfall continued throughout the week across the county. An Extension rain gage located at one Martin County farm in Palm City registered a total of 15.62 inches of rainfall between Sunday, November 9 and Friday, November 13.

All of the rainfall, combined with high tides and stormwater runoff from neighboring communities, caused higher than normal water levels in Martin County. As of this writing, Martin County’s Flooding Updates note that “stormwater systems have not been able to fully recover, leading to temporary flooding of roadways, low lying and slow draining areas throughout the community and leaving certain areas vulnerable to re-flooding”. 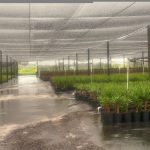 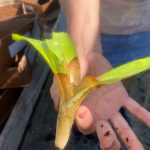 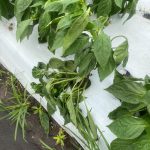 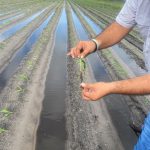 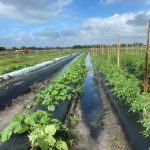 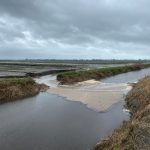 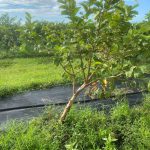 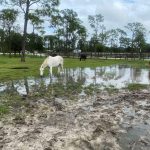 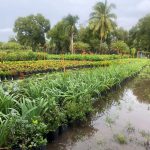 Growers generally reported that prior to Tropical Storm Eta, they were able to maintain acceptable water levels.  However, the added tropical storm rainfall throughout the second week of November tipped the scales to flooding for many. With the already overwhelmed stormwater system in some portions of the county, flooded operations sometimes had nowhere to send their excess rainfall.  Others were able to drain their fields into their network of farm ditches, but sometimes not quickly enough to outpace rainfall. Flooding affected crop health, planting schedules, drainage infrastructure, livestock forage, and other aspects of agribusiness operation.

Impacts to crop health were owed to erosion, saturated root systems, and diseases. Many of the  vegetable crops in our area are planted on raised beds. Flooding like we experienced here caused some beds to erode. Fragile crop roots were then exposed, affecting crop water balance and stability. Due to the high water levels and rainfall in many farm and nursery operations, even crops planted on raised beds or in pots on nursery tables were often saturated with water for long periods of time. One grower told me he began drawing down his fields two days in advance of the storm, thinking he would be ahead of it.  However, his crops were quickly swamped, and he was out purchasing another pump at the time I visited. Flooded crop root systems experience stress from lack of oxygen and are more vulnerable to diseases, especially fungal pathogens (Liu, Li, Fu 2019). While some of the disease and crop loss is already evident, more is expected over the coming days and weeks. Many growers will have to completely re-plant fields that aren’t likely to recover.

Growers who had already contracted with buyers to supply their product may be affected in the coming years. As one nursery grower explained, the contract buyers, such as large chain retailers, will often look unfavorably toward growers who aren’t able to deliver the product quantities or quality promised. Buyers may choose to decrease the quantity sourced from a producer or exclude them entirely in future years. Contract changes are one way that a natural disaster can impact growers longer-term.

Vegetable growers in Martin County usually begin planting in the late summer or early fall.  At the time the storm passed through our area, many growers were in the process of planting out their farm fields. Even before the storm, generally heavy rainfall across the region had delayed planting for some of our growers. The saturated soils before, during, and after the storm made it impossible for many to continue planting on schedule.  Delayed planting can then mean decreased total yields and profit for the year.

For livestock producers, flooding promotes disease and decreases available forage. Livestock difficulties with Eta included flooded pastures and loss of nutritious forage. Affected ranchers have been trying to draw down water levels for a couple of weeks now in some cases, while providing supplemental sources of nutrition, like hay and molasses.

While less damaging than the heavy rainfall in general, the winds associated with Tropical Storm Eta did affect some farm/nursery structures and crops. TCPalm reported that winds from Eta were generally up to 40 to 45 mph on November 8.  Gusty winds tore coverings on some shadehouse and greenhouse structures and took down some livestock fences. Farmers, ranchers, and nurseries worked to quickly repair, protecting livestock and crops. Winds also blew fruit trees and vegetable crops over, scarred fruits, and caused premature fruit drop.  Listing fruit trees are mostly being re-righted and staked by growers, with hopes they will survive. Smaller, tender vegetable crops that had been wind-damaged are in some cases beyond saving. Fruits blown off of trees prematurely were a loss.  Equally a loss were fruits that were wind-scarred and rendered un-sellable.

Overall, Tropical Storm Eta, combined with prior heavy rainfall, caused losses for many of our growers, due to flooding and winds. Though they are used to weather setbacks, took preventative steps before the storm, and quickly acted to salvage whatever they could, many of our growers are still experiencing losses.

Listed below are related articles with resources for producers to report their damage, recover, and prepare for the future.

Funding to Assist with Marketing Agricultural Products during the Pandemic explains how producers (including nurseries, farms, ranches, etc.) can obtain funding through the Coronavirus Food Assistance Program’s 2nd iteration.

Good Food Connections offers an opportunity for growers to network with one another, chefs, food pantries/banks, to share resources and outlets for produce.  The next virtual meeting is scheduled for December 3rd.