Fleas in the Home 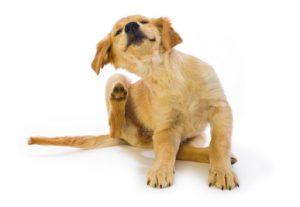 Fleas have been a persistent problem in the home for thousands of years. They can afflict a wide range of hosts such as cats, dogs, and even you. Fleas are not only an annoying pest that can cause terrible itching; they also can transmit diseases and parasites. The famous bubonic plague is one such disease they can transmit. The most common parasite they transmit is the common tapeworm which occurs when the flea containing the tape worm is swallowed.

Let’s go over a little background on the flea’s life cycle. A flea starts out as an egg which then hatches a few days later. The larvae, which is very small and worm-like in appearance, feeds primarily on the blood left over from adult fleas feeding on the host. It will then pupate, which is similar to a butterfly chrysalis, where it will mature and remain dormant until a potential host stimulates it to emerge. The new adult will immediately seek out a host and begin feeding on it.

So, how do we get rid of them? Complete elimination of the flea is not an easy task as it requires several steps to be taken together. Each step reinforces the other. Without all of the steps being taken, there will likely be a failure to control this voracious pest.

First, fleas need to be detected. Fleas are often brought to our attention when a pet begins scratching relentlessly. They can also be detected by checking pet’s fur for “flea dirt” which resembles small coffee grounds. The best way to confirm that fleas are present is to see the adult fleas crawling in the fur. Check along the pet’s back and hind-quarters. They are also very common on pet bedding. Once identified, it is important to begin treatment immediately.

Treatment should include the host, the floors in the home, especially on and around pet bedding, outside the home in most cases, and removing or preventing new fleas from being brought into the home.

There are many treatment options, however the most common one is a very thorough washing with flea shampoo containing insecticides and often flea spray is necessary as well. The bedding should be thoroughly washed or sprayed with flea spray or powder. The flooring or carpet will also need flea spray or flea powders that cover all of the rooms where fleas may be. The area surrounding the home often contain many fleas as well and will usually need to be treated with the appropriate insecticides. Also, prevent or remove other hosts which may bring in new fleas, such as stray animals or animals living around the home.

All of these steps must be taken at the same time in order to eliminate all of the flea’s life stages. Sometimes these steps may need to be taken repeatedly to ensure complete control.