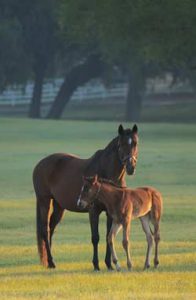 The horse has been and still is a symbol of: courage, strength, speed, pride, death, war and even the passage of time and human life.

In mythology, the Sun is said to be drawn in his chariot by celestial horses in his daily journey across the skies. To the Norsemen and Romans of old, the horse was similarly associated with the moon, drawing that god’s chariot across the skies. Additionally, Neptune is credited with creating the horse in a contest with the other gods for the honor of naming what was to be the city of Athens.

The first sea horses had a horse’s head, forefeet and barrel, terminating in a fish tail. Later the sea horse had the head of a horse and the body of a fish. Sea horses were also prevalent in early Irish myths. When a tempest breaks over the sea in Ireland, the breakers are said to be the white horse of the Gaelic God of the Sea.

According to German legend, there was once a beautiful young maiden, named Lorelei, who threw herself headlong into the river in despair over a faithless lover. Upon her death she was transformed into a siren and could from that time on be heard singing on a rock along the Rhine River. Her hypnotic music so mesmerized the sailors that they would crash into the rocks on the narrow gorge of the river. After luring sailors to their destruction, Lorelei would place them in a sea-green chariot drawn by white horses.

The Hungarians and Spanish believed all black horses were lucky while the French claimed the reverse.

The aforementioned horse myths are amusing to think about and help fuel the romanticism associated with horses, while other myths associated with raising and managing horses may be at best unnecessary and costly and at worst detrimental to horse training and/or overall health.

Not long ago, I was in a local barn at feeding time and noticed one of the grooms mixing feed for the afternoon feeding. He opened two bags of commercial feed and poured the contents into the wheelbarrow. Next, he mixed two bags of steamed crimped oats with the feed. I asked him why he was mixing oats with the feed. He said the broodmare manager had told him to. My curiosity got the best of me and I asked the manager why she was having the crew mix oats with the feed. She said they mix in oats because that’s the way her Daddy did it. To make a long story short, her daddy was buying a pre-mix in bulk and only had to mix in oats to complete the ration.

The point is, be sure to know the reason(s) why you’re doing something and always seek advice from reliable sources. To learn more about the many myths and misconceptions related to raising and managing horses, be sure to check out this year’s and previous years Florida Equine Institute educational videos http://cflag.ifas.ufl.edu/Video.shtml and proceedings papers at http://cflag.ifas.ufl.edu/FLEquineProc.shtml This University of Florida Extension program is committed to providing Florida Horsemen and Horsewomen with the most current up to date equine management information.