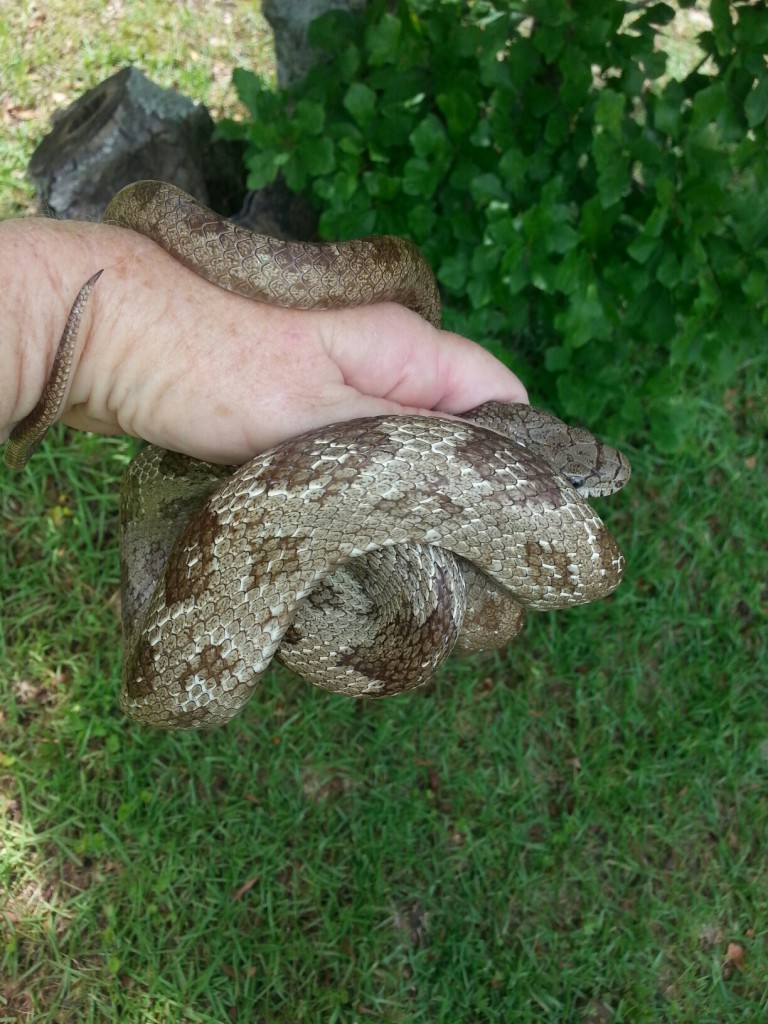 I am sure you have all heard the old adage “the only good snake is a dead snake” and to some, this is just how they feel about all snakes. There are a few people I know that would hurt themselves while trying to get away from a snake – any snake – anything that looks like a snake. Shoot first, ask questions later – maybe. And though I welcome them in my garden, mainly because I have mice, there are rules that must be followed and I enforce them!

The gray rat snake (Pantherophis spiloides) has long been considered to be non-venomous, but now studies show that some Old World species do possess a small amount of venom but the dose is so small, it poses no threat to humans. That mouth sports a healthy amount of teeth and they are really sharp – I know this first hand! They are found throughout every Southeastern state and most of the Eastern and Midwestern states as far north as Southern New England and Southern Michigan. Though commonly found in abandoned buildings and barns, they also inhabit rocky areas, timbered hills, hardwood forests, river floodplains, swamp margins and residential areas.

An adult can live up to 15 years in the wild and 25 years in captivity. Yes, I hear they make great pets. Pass. Besides, they stink! The males will usually outlive the females by a few years – no real explanation given on this. Adults average 36-72 inches in length- the record is 84.25 inches. That’s a huge snake! Breeding occurs during April through July. The females lay anywhere from 5 to 27 eggs during the summer months. The young will hatch during the months of July through September. They are normally active at night but it is not uncommon to see them during the day.

On their menu you will find rats, mice, squirrels and birds as well as bird eggs. A juvenile’s menu is small frogs, lizards and the smaller rodents, like baby mice. These snakes can scale a brick wall as well as a tree trunk, eventually making it up into the tree because they are great climbers. When frightened or threatened, it will take on a “kinked” posture, remain motionless and then release a malodorous musk. They will also rattle their tail to get your attention, but this is not a snake to be concerned with. The gray rat snake is actually a nice looking snake with colors of gray and white. Their skin is slick and cool to the touch. But be careful with it because it is a constrictor so your hand and arm are fair game. I have found, though, that it releases its coils when it realizes it may be in a little bit of trouble.

There are several varieties of rats out there with the most common one being the gray rat snake. But unlike venomous snakes which usually have a triangular head, rat snakes have a slender head that flows right into a long, slithering body. There is a yellow, king, a red-backed, red-tailed green, mountain and keeled rat snake just to name a few. These snakes are not aggressive. Should you not want to try and catch one, they do not like to have air blown on them! Too close? Shake the limb it is on, if you can, it will normally slither off. Can’t move the limb? Well, they are easy to catch – make sure you wear your gloves, grab it just below the head and move it to another location. I have moved one so often, it has almost become a pet. Besides, I would rather move the snake than listen to all the birds fussing over the thing. All those beaks and they can’t take care of it!

I have heard if you have the non-venomous snakes, the venomous ones will stay out of your area. I must say there is some serious truth to this statement. I have lived out here in the country since 1996 – I have seen one cotton mouth – what it was doing in my yard is beyond me. I am far away from any water so it was truly lost. I will invoke the 5th on what happened to it.

I know that all snakes have a place in our environment but that does not mean I particularly want them cohabitating with me in my yard. And yes they eat a lot of the rodents some pay big bucks to have removed from their yard. I am glad snakes have a love for mice. But when it comes to kids in the yard, your grandkids, pets and you, a line has to be drawn against all the unwanted ones.

Now, I have never killed a gray rat snake, but I certainly have come pretty close. Last year, a gray had already swallowed 3 baby birds out of one nest and it was trying to swallow the fourth one. I shot the snake down – baby bird survived – the butt of my gun was turned into a golf club and the snake’s head was the ball. He also survived…thankfully, the fall time of the year was coming on and as they hibernate in the cooler temperature, this was the last nest that was bothered in my yard. Enough is enough!

Now I know this article may not change your mind about snakes, but just think about it before you do it in, most especially the non venomous snakes – the others – your choice. The gray rat snake should be considered a welcomed guest and as it will clean up all the unwanted rodents for you, you will be rodent free and you can pocket the money the critter getters would have gotten from you!

Kathy Kinsey is a Master Gardener volunteer with the UF/Leon County Cooperative Extension Office. You may also email us at Ask-A-Mastergardener@leoncountyfl.gov with any gardening questions you may have.