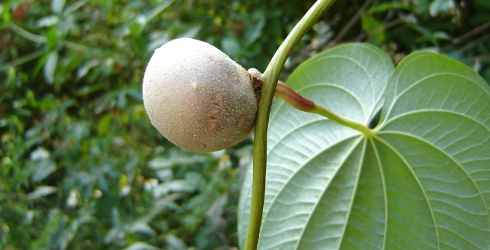 Q and A: I have recently purchased several acres and am having a hard time getting rid of air potato. Can you provide me with some information?

from S.H., in North Fort Myers

Florida is home to many exotic invasive plants. The air potato (Dioscorea bulbifera) is one of many. Control of exotic/invasive plants can be difficult and tiring. There are several methods of control, which include manual removal, mechanical removal, and herbicide treatment. In many instances, an integrated approach may be the best way to conquer this “weed”

Air potato is an invasive plant species in Florida that likes natural areas. If found on your property it should be removed. This plant has been listed by the Florida Exotic Pest Plant Council as one of Florida’s most invasive plant species since 1993 and was added to the Florida Noxious Weed List by the Florida Department of Agriculture and Consumer Services in 1999. These listed plants may not be introduced, possessed, moved, or released without a permit.

Air potato is a problem because it can quickly engulf native vegetation in natural areas and climb high into mature tree canopies. This plant produces a large number of bulbils (potatoes), which facilitate its spread and make it extremely difficult to eliminate because plants will sprout from very small bulbils. The air potato is native to tropical Asia and was introduced to Florida in 1905. It is found throughout the state mostly in pinelands and hammocks of natural areas.

How do you know if you have air potato? This plant is a vigorously twining herbaceous vine, which arises from an underground tuber. Freely branching stems grow to sixty feet in length and are round or slightly angled in cross sections that twine to the left. Aerial tubers (referred to earlier as bulbils) freely form in leaf axils. These bulbils are round, five inches by four inches, grayish, with mostly smooth surfaces and tiny bumps. Leaves have long petioles (stalks) and alternate style leaves that can be eight inches or more in length. These leaves are broad, heart-shaped with basal lobes that are usually rounded, and have arching veins that originate from one point. Flowers are rare in Florida, but if present are small, fragrant, and both male and female rising from leaf axils on separate plants. Fruit is encapsulated with the seeds partially winged.

To rid of air potato a homeowner can use Brush-B-Gon by Ortho. The herbicides Garlon 3A or Garlon 4, diluted with water, are probably more effective for controlling air potato when sprayed on the foliage. These two products can be purchased from an agricultural or forestry supply store, but can be quite expensive. When vines are growing up into trees and mixed with desirable plants, the air potato vines should be cut and destroyed, and the remaining air potato vines treated with herbicide solution. All bulbils must be picked up or new plants will form. All plant materials should be disposed of so they do not spread to other areas. For example, send them to a landfill where they will be incinerated or apply for a burn permit yourself. Several follow-up applications of herbicide will be necessary through the growing season and possibly in successive years. Plants become dormant in winter months, and locating and removing bulbils is easier at this time since vegetation is not as thick and dense. Herbicide should be applied when plants are actively growing in the spring and early to mid summer. Always follow the instructions on the label, more product is not necessarily better. Property owners may wish to hire a vegetation management contractor to remove air potato since it is not an easy task.

← Q and A: I have an open aerator on my water system that now smells like rotten eggs. Do you have any ideas for troubleshooting this problem?
Q and A: With the evening rains have come the thousands of ants. What can I do to rid these pests from my home? →