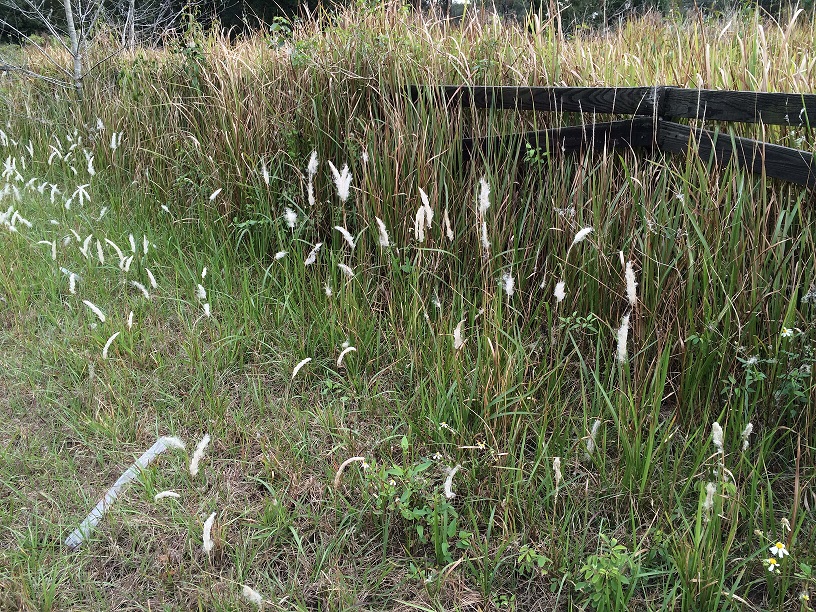 Cogongrass, a noxious weed, is prevalent in Lake County (and throughout Florida) but often goes unnoticed as it blends in well with the landscape and does not advertise its presence with showy flowers, thorns, or berries. Despite its unassuming appearance, to the educated eye,  Cogongrass is readily identifiable. This grassy weed ranges from 2-10ft in height at maturity. Young plants are a bright and vibrant green and older plants boast a more subdued hue. In the winter Cogongrass may turn a tannish brown after a frost. The leaves are approximately 2cm wide near the base of the plant and come to a sharp point at the tip. Leaf margins are finely serrated and may cause micro abrasions similar to papercuts when handled. The center midrib of Cogongrass is prominent, off white in color, and offset to one side.  Cogongrass rhizomes, underground stems that send up shoots, are extremely numerous and capable of growing to a depth of up to four feet. When it blooms, the seed heads are white and fluffy, making the plant more readily identifiable.  Each tiny seed is carried on a plume of feather like hair that serves as a wind sail for the seeds.

Cogongrass is widely recognized as one of the world’s worst weeds, and with very good reason.  This non-native grass species is aggressive and highly invasive. It takes over native landscapes, destroys wildlife habitats, encourages wild fires, and competes with other native and planted vegetation. Cogongrass is native to Southeast Asia where it was commonly used to create thatched roofs on primitive dwellings. Other uses for Cogongrass included planting for erosion control and use in Chinese medicine. Cogongrass was accidently introduced to the United States in 1912 when it was used as a packing material for citrus being shipped from Japan to Alabama. In the 1930s and 40s, some enterprising scientist studied its potential use as a cattle feed in Florida.  After all, it grew quickly and seemed to need little management.  Unfortunately, mature cogongrass is highly unpalatable to cattle and the weed quickly escaped containment. Because it is well adapted to poor growing conditions, has no natural predators, and spreads readily, Cogongrass now occupies more than 1.25 million acres of land in the Southeast.  Once established, this weed takes 3-5 years of diligent treatment with herbicides to beat back. It burns quickly and at a high temperature and will regrow rapidly after a burn. In fact, the presence of Cogongrass in a landscape increases the risk and severity of fire.

Cogongrass has been labeled as a noxious weed by both State and Federal agencies. It is illegal to sell hay or sod from cogongrass infested fields. Farmers who discover an infestation face a lengthy and expensive clean up all the while being unable to utilize the land as intended.  Likewise it is illegal to transport this weed in any fashion. Unfortunately, cogongrass did not get the memo and readily volunteers itself in disturbed areas. The feathery seeds can travel a good distance on even the gentlest of breezes and rhizomes are readily spread on vehicles and mowing equipment.