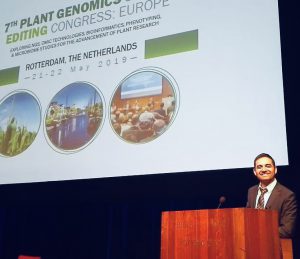 Özbudak’s mentor, Liliana Cano, is an assistant professor of plant pathology at the UF Institute of Food and Agricultural Science’s Indian River Research and Education Center in Fort Pierce, Florida. Cano said Özbudak won the speaker’s prize and 15-minute presentation slot because his work is distinguished.

Cano said Özbudak’s work is groundbreaking for strawberry production as the fruit is a nutritious and increasingly important crop worldwide. According to a scholarly journal research article published in Compendium of Plant Genomes, by David Simpson, a plant breeder based in the United Kingdom, strawberries are produced commercially in 76 countries. Simpson wrote that worldwide production of strawberries was more than 7.7 million tons in 2013, following an increase of 142% over the previous 20 years.

“As plants are repeatedly attacked by different organisms, such as fungi, bacteria or nematodes, they have evolved different defense strategies,” said Özbudak. “The first defense mechanism is based on the detection of the essential components of pathogens that are evolutionarily conserved like chitin of fungi or flagellin of bacteria.”

An effector molecule can increase or decrease enzyme activity, gene expression, and signal cells in strawberries to become infected by the fungus. Özbudak is working with fungal pathogen genomes and identifying effector proteins that promote disease.

“Our goal is to determine the genes encoding effector proteins of the pathogen that is associated with anthracnose disease that is expressed during infection,” said Özbudak. “This will help us to highlight candidate genes important for disease development.”

To identify the genes in effector proteins, Özbudak said nucleic acids would be extracted from infected leaf tissues. The candidate effector genes will then be used as molecular tools to bring about resistance in strawberries against crown and fruit rot in the fresh strawberry crops.