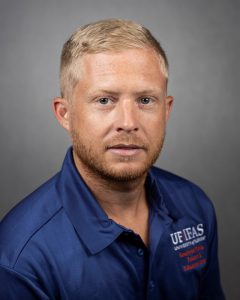 Problem: Soils in south Florida are sandy mineral soils, predominantly Spodosols, and have low organic matter. These soils also have low nutrient retention capacity. After many years of vegetable production, the sandy topsoil of many farms has increased pH above 7.3. This can cause nutrient availability problems, specifically phosphorous (P).

Objective: This was a preliminary experiment to compare the pH lowering effectiveness of two elemental sulfur (S) soil amendment application methods, granular and water dispersible. Both experiments took place in a greenhouse in bags using field soil (Immokalee fine sand) at the Southwest Florida Research and Education Center (SWFREC). No plants were planted in the bags, however drip irrigation was setup over the bag to supply irrigation to the soil in the bags (fig.1). The water-dispersible S was applied twice a week for 4 weeks until the desired application rates were achieved, and the granular S was mixed in the soil and placed in the bags all at once for eight weeks. Both treatments received irrigation to keep the bags soil moisture at field capacity. The S rates used for both experiments were: 50, 100, 150, 200, 250, and 300 lbs./ac. The soil in the bags were sampled weekly for pH changes for the duration of the experiment.

Results and Conclusion: The granular S experiment lasted for eight weeks with no change in soil pH for any of the rates tested (fig.2).

The water-dispersible S applied treatments were conducted in two 4-week intervals. Drastic pH reductions were observed in both four-week test in all treatments however, it was most significant in the higher rates (fig. 3 & 4). In both water-dispersible S experiments the 50lbs/ac rate had the best response with a final pH of 6.3 and 6 for test 1 and test 2, respectively. water-dispersible S rates higher than 50lbs./ac lowered the pH beyond the desired range for crop production which is 6.0-6.5. There was no drip tape emitter clogging noted while injecting the S amendment.

Economics of Sulfur Application: The water dispersible S will cost $40 – $50 per 50lbs and the granular S will cost $10 – $20 per 50lbs. Both products are commercially available, and these prices were quoted as bulk purchase prices.

Current Experiments: The previous data is preliminary work that is continuing and is currently underway at SWFREC in a research field with tomatoes. This experiment will evaluate S application timing, pH change in field conditions, phosphorous (P) availability after lowering pH, and plant response, quality, and yield. Periodic updates will follow regarding this project.

Hello Anjum, In the trial, S was applied once at the beginning of the tomato growing season and pH was kept low throughout the season. More research is being conducted to verify this. Thanks, Craig

how often do i apply s to keep the ph.in range.