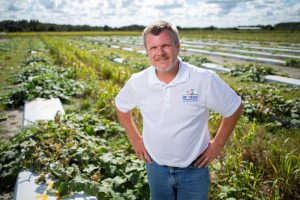 Cucurbit production in Florida is impacted by downy mildew on an annual basis. Nearly continuous production of cucurbits occurs temporally throughout Florida, which puts extensive pressure on the pathogen population to select for individuals that are resistant to current fungicides labeled for CDM. Loss of efficacy due to the development of fungicide resistance is becoming a major concern for Florida cucurbit growers who rely on these products to manage CDM. Recently published research by Gary Vallad’s team compared efficacy of 11 different fungicides across 3 trials in cucumber. 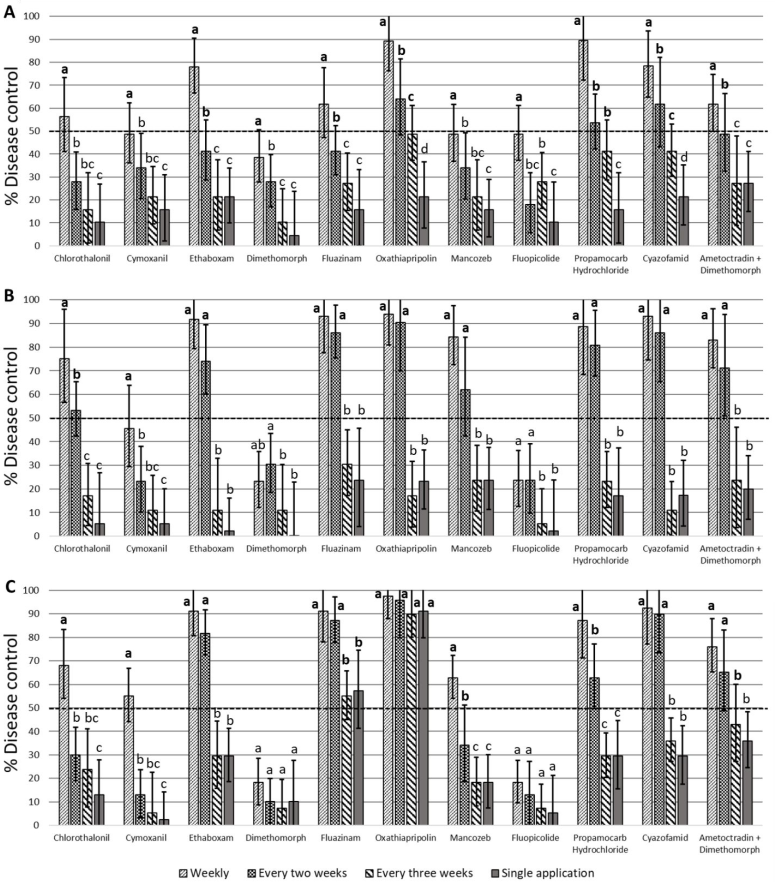 Effect of application interval by treatment on percent CDM control for Trial 1 (A), Trial 2 (B), and Trial 3 (C). Trial 1 had the greatest disease severity followed closely by Trial 3, while severity in Trial 2 was roughly half. Fungicides were initially applied to each sub-plot and reapplied at specified application intervals of (1) weekly; (2) every two weeks; (3) every three weeks; or (4) single application. The dotted line represents CDM control at 50%. Letters denote statistical differences between application intervals within each treatment chemistry; bolded letters denote treatments that statistically provided disease control equal to or greater than 50%.

Results indicate that there are multiple active ingredients are effective against CDM, but that none exist as a silver bullet. Dimethomorph (Forum), fluopicolide (Presidio), and cymoxanil (Curzate) were much less effective than the other active ingredients, and these results confirm reports in other states of resistance to these chemistries. Results also indicate that in seasons less conducive for CDM development (such as in Trial 2), application frequency of the most effective materials (oxathiapripolin: Orondis Opti, fluazinam: Omega, ametoctradin+dimethomorph: Zampro, cyazofamid: Ranman, propamocarb hydrochloride: Previcur Flex, and ethaboxam: Elumin) may be reduced, as the effectiveness of weekly applications was not significantly greater than bi-weekly applications. From this data, the duration of field activity was also determined.

Given the aggressive nature of CDM, this is not a recommendation for growers to adopt a 14-day interval with these fungicides, however, utilizing CDM prediction tools may allow growers to increase intervals between applications for parts of the season. The primary recommendation resulting from this study is to leverage this information to improve rotations and minimize reliance on cyazofamid (Ranman) or oxathiapiprolin (Orondis Opti). Increasing rotations will limit fungicide resistance in Florida and assure a larger toolbox for years to come.