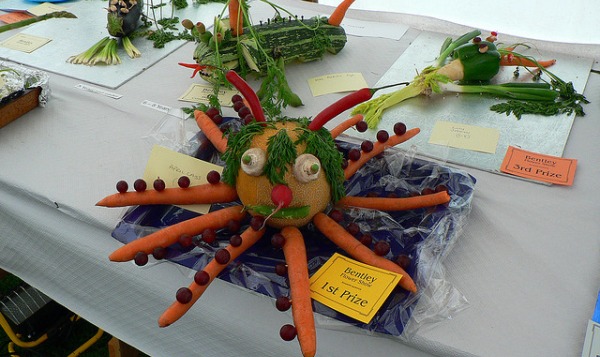 Okay, we know you’ve heard it before: kids aren’t eating enough fruits and vegetables. And while there are plenty of good recipe and snack ideas out there, sometimes the real issue is that your child just won’t eat or even try these healthy foods. However, we also know that it’s not a good idea to force kids to eat or to “bribe” them into eating. So, what’s a parent of a veggie-phobic kid to do?

A Chance to “Play,” but No Pressure to Eat

According to one novel study, you might start by simply encouraging your child to touch, smell, play with, and observe fruits and veggies. This research, which was based on ideas found in a European children’s food appreciation curriculum, looked at about 90 toddlers between the ages of one and three. About 50 took part in a four-week program designed to introduce them to one of two groups of four unusual fruits and vegetables (such as prunes, rhubarb, and squash).

These children enjoyed playing with, observing, smelling, reading stories about, and singing about the foods—but for the first four weeks, they were not asked to taste them. Another group of similar children (the “control” group) did not participate in any such activities.

At the end of the four-week period, all children were given the opportunity to taste and eat the foods in question. And there was definitely a difference between children who’d had the opportunity to“check out” these novel fruits and veggies, and those who had not.

Children in the control group (who didn’t participate in any activities) approached (or didn’t approach!) all the new fruits and veggies in about the same way. However, children in the other groups were quicker to touch the foods they’d learned about than those they had not–and more likely to eat them, too. Interestingly, this was more true for the novel veggies than the novel fruits.

Try It at Home

How long would this new openness last? And would children be happy to accept these new foods as part of lunch or dinner? That, we don’t know yet. But parents who have young children and are wondering about fun and effective ways to introduce children to new foods might take a page from this book. How about a round of eggplant and cantaloupe bowling?

Have your own story to share about introducing your child to new foods? Share novel, unique, or just plain effective methods in the comments.

Is Your Child Eating Enough Fruits and Veggies? (Mine Isn’t)

Tips for Getting Your Kids to Eat More Fruits and Vegetables

MyPlate Ways to Fruits and Vegetables for Your Child

← How Clean is Your Kitchen?
Is Spanking Okay for Some Families? →