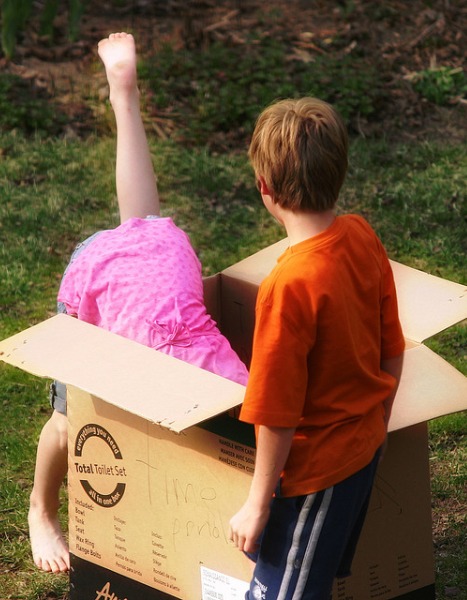 Could This New Type of Playground Make Kids More Active?

It’s recess time, and students pour out of the classroom onto the playground and into a bright and beautiful day. The children seem pretty excited, and it looks like they’re heading for…the buckets? The hay bales? The pool noodles?? What’s going on here?

Welcome to a new idea in playground design. Although most of us may associate recess with traditional equipment like swings, slides, and jungle gyms, as well as sports like soccer or basketball, the concept of the “loose parts” playground is getting some attention these days. Some companies now sell sets of interesting objects that children can experiment with. Alternatively, school staff can assemble a collection of child-friendly and intriguing (at least to young children!) items like containers, buckets, tires, boards, boxes, and more. The idea is to spur creativity and open-ended, collaborative play that constantly changes.

But could loose-parts playgrounds also get kids to be more active? A new study from Australia suggests that this just might be a possibility. Researchers compared school-aged children who played on a conventional playground to children who played at a new playground set up only with so-called “loose parts.” Children at the conventional playground had access to typical climbers, slides, monkey bars, and so on. Those at the experimental playground had no such equipment, but were given materials like plastic sheeting, large tires, hay bales, boards, and yes, pool noodles. Both groups also had simple sports equipment on hand.

The children wore special devices to track their movement, and playground activity was also videotaped. This allowed observers to learn that the students who were given the unusual materials moved around more and engaged in more vigorous exercise than those on the traditional playground. This effect persisted even eight months later. The children also reported enjoying the new and interesting materials.

Of course, this type of play is really very old and familiar—just think of a child at the beach with a bucket and shovel, or a toddler rummaging through the kitchen cabinets. However, it takes a change in thinking to bring these materials to school or neighborhood playgrounds. But some communities are beginning to try it out. In fact, New York City has started making loose parts available on some of its playgrounds.

With childhood inactivity and obesity major concerns, this inexpensive approach to the playground may just start to catch on. Keep an eye out for pool noodles and hay bales at a park near you!