The eggplant was first grown some 4,000 years ago in India and Pakistan. Thomas Jefferson , who grew eggplant in his garden at Monticello, is thought to have originally introduced the plant to the United States.

A member of the nightshade family, eggplant is related to the tomato and potato. Though commonly thought of as a vegetable, it is actually a fruit, specifically a berry. There are many varieties, ranging in color from deep purple to white, in length from 2 to 12 inches and in shape from oblong to round. In the United States, the most common is the large, pear-shaped variety with a smooth glossy dark purple skin. Italian eggplants are similar to the large purple ones but are smaller, with a more delicate skin and finer flesh. Oriental eggplants are slender and elongated with thinner skins and fewer seeds. They range in color from solid purple to striated shades. They are usually sweeter and smoother than the larger varieties. White eggplants are firmer and less moist. They are also closer grained, creamier and less bitter, with tougher skins than the purple variety.

Florida is one of the nation’s leading producers of eggplant. Grown mostly in the central and southern parts of the state, Florida’s harvest begins in late October and continues until June. Heaviest production is from December until May.

In eggplant skin, researchers have found ‘nasunin,’ a potent antioxidant and free radical scavenger that protects cell membranes from damage. Nasunin protects the lipids (fats) in brain cell membranes. (Source USDA) Approximately 1 cup of raw eggplant contains 21 calories and small amounts of important vitamins and minerals such as B1, B6, Vitamin A, folate, copper, manganese, potassium and fiber. 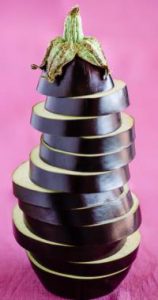 When buying eggplant, look for a medium-sized eggplant that is fairly lightweight. Heavier, larger eggplants tend to have larger seeds which can be bitter. The eggplant skin should be smooth and relatively free of scarring. It should be firm to the touch without soft spots which indicates bruising. The cap should be green with little to no browning. Eggplant will keep up to five days in the refrigerator. Do not store in the coldest part of the refrigerator, as this will cause chilling injury which will later the texture and flavor.

Eggplant can be prepared with the skin off or intact. It is becoming more popular as a meatless, main dish adding bulk and fiber to meals with fewer calories and fat. It is also a popular side dish and can be baked, broiled, grilled, fried, stuffed, sautéed or boiled. Whichever method you choose to prepare an eggplant, cook it thoroughly. Since the flesh discolors rapidly, an eggplant should be cut just before using. The brown coloration will not affect the flavor when cooked.