Forests serve as the largest terrestrial carbon sink, continuously taking carbon out of the atmosphere and storing it in trees and in forest products. In this bulletin we provide some simple definitions to some of the common terms that are used when talking about forest carbon topics and programs. 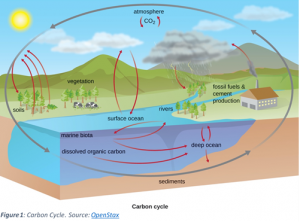 A process by which carbon travels between the atmosphere, soil, water, and organisms.

A system or part of a system that can accumulate or release carbon.

A system that has the ability to absorb carbon dioxide from the atmosphere and other parts of the carbon cycle.

The amount of carbon captured by a carbon pool.

The removal of available carbon from the atmosphere. When carbon is removed via photosynthesis it is biological carbon sequestration.

Consists of the actions taken to avoid and limit the release of greenhouse gasses (e.g. carbon dioxide, methane) to slow or prevent climate change.

A tradable certificate or permit that allows one to emit a specified amount (typically one metric ton) of carbon dioxide or other greenhouse gasses.

A principle in the forest carbon industry where one demonstrates that without the intervention of the carbon credit buyer the carbon capture activity would not have occurred.

A system for controlling pollution by setting caps on the release of emissions, but allowing the purchase of permits to release more emissions (such as carbon credits).

A file format which stores the geospatial vector data for geographic information system (GIS) software. These are used by some programs to calculate the carbon storage capacity of forest stands via remote sensing measurements.

Extension Program Manager at the UF/IFAS School of Forest, Fisheries, and Geomatics Sciences. I run the Florida Land Steward Extension Program. The program’s mission is to help private landowners to manage their land resources for environmental, economic, and social benefits.