Food, water, shelter, and consistently awe-inspiring scenery. These are just a few things that are provided for us the day we come out of the womb, and although our mothers are usually the ones thanked for these commodities, there is another mother who ultimately encapsulates these items, and is rarely ever thanked for them; mother earth. There is however, a day on which her inhabitants come together to thank her for all the hard work she has done, and that day is Earth day, occurring annually on April 22nd.

Although many celebrate the holiday through events or educational endeavors, the history of earth day is relatively unknown, but very important. In 1967, a marine biologist named Rachel Carson published a book called Silent Spring, which addressed the extreme chemical usage going on at the time which was harming nature and humanity alike. In her book, Carson tackles the issues with these chemicals and all the harm they did to their environments, and although it was a tough message to hear at the time, Silent Spring went on to shape the modern environmental movement as we know it. In the 1970s, Wisconsin Senator Gaylord Nelson became inspired by Carson’s work and the anti-war and pollution movements of the time, and decided that it was high time for a day to be set aside to bring the issues that our planet was facing to light, and to thank her in the process.

Earth day was, at first, successful on a smaller scale, so by the time the 1990s rolled around, the observance was seriously gaining popularity and became an international campaign. Today, earth day still stands as an action call and a day to reflect on the reparations humans have made with earth, but to also inspire younger generations to keep rebuilding our home.

Although humans have come far in recent years to undo damage that was done to the environment, we still have ways to go, which is why earth day is such an important holiday! Earth day brings awareness to the environment and the ways we can work together to improve it, whether that’s lobbying for greener bills to be passed in congress, or participating in a beach cleanup project.

A specific example of why Earth day is important is because of the coral reef campaign launched in honor of the holiday. Coral reefs are a vital ecosystem to the world’s oceans, and they house many keystone species whose habitats are irreplaceable, but due to unchecked human activity, the reefs are dying off faster than ever before. These struggles have not gone unnoticed however, and earthday.org now funds efforts to increase biodiversity in reefs and other ecosystems which are strained because of human intervention.

Another issue which is hard to see without taking a good, contemplating look at earth is microplastics, which are now turning up in everything from whale stomachs to human placentas. While these nasty little chemicals spread, people around the globe are working in an effort to control and contain them. These are just two examples of many successful projects that have been put into motion all because of a simple day of appreciation, and even more of a reason for us to continue to care for the earth on April 22nd, and year round.

Knowing all of this about the history of earth day and why it is important, you might want to get involved with a campaign or cleanup in your area! The good news is that there are events like this which occur through 4-H all the time. Talk to club leaders about putting together an environmental clean-up initiative, or attending a county or statewide event to benefit the environment. One of the pillars of 4-H is our commitment to community, and nothing says community like making the world a healthier place to be. So in honor of Earth day, next time you step outside, remember to thank mother Earth for all she gives to us, and maybe give something back. 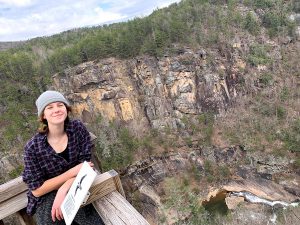 Hi! I’m Anastasia Godfrey, I’m from Pinellas County. I’ve been in 4-H for 8 years and to say that it has been a very important part of the development of my leadership skills would be an understatement. I am currently a member of Executive Board, serving on the Legislature and CCS Committees respectively. I am so excited to author a post on this youth blog.

by 4-H: Voices of the Youth

4-H: Voices of the Youth

'4-H: Voices of the Youth' is a blog written by youth for youth! The purpose of this blog is to showcase the amazing stories within 4-H through the eyes of it's own members.