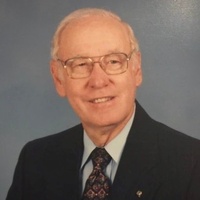 UPDATE: On December 4 the University of Florida Board of Trustees approved the naming of The Henry and Nell Davis Pavilion at 4-H Camp Cherry Lake in Madison, FL.

Henry P. Davis embodied the 4-H pledge for his community, country and world. Perhaps his character of service was cemented as a young boy when he joined his family constructing cabins at 4-H Camp Timpoochee in Niceville, Florida. Throughout his youth, a love for 4-H would be fostered at this same camp and with Escambia County 4-H. Service to others with a hallmark smile defined Mr. Davis’s life until his passing on August 31, 2020 and defines his legacy.

A lifetime of service

After high school Mr. Davis entered the U.S. Army, serving in post-war Germany, and then enrolled at the University of Florida College of Agricultural and Life Sciences (UF/IFAS CALS). After graduating in 1950 with a bachelor’s in soil science he launched a 32-year Extension career with his first positions in Santa Rosa and Gadsden Counties. He and his wife Nell Davis then relocated to Taylor County where he would serve 28 years as county extension director, and they would raise their family.

During his tenure with UF/IFAS Extension, Mr. Davis advanced agriculture, youth development and communities in the region with the establishment and growth of programs such as Taylor County Farm Bureau, the first Florida Forest Festival, the statewide 4-H Forest Ecology Program and more. He was honored with numerous awards including an official “Henry Davis Day” in 2002, the Florida Farm Bureau Distinguished Service Award, UF/IFAS CALS Award of Distinction, and in 2018 was inducted to the Florida 4-H Hall of Fame. If you asked Mr. Davis his most significant contribution, he would point to the time invested in youth through 4-H.

Mrs. Nell Davis supported Henry in his often long and irregular hours as a county extension director. She retired from the Department of Agriculture and Consumer Services after a 20 year career and was involved in a number of community programs including leading the Perry chapter of the Red Cross and serving as volunteer coordinator for the county. She passed away in 2006.

Mr. Davis provided generations of Taylor County youth with opportunities in local 4-H clubs, Short Course and Congress trips to Gainesville, and summers at Camp Cherry Lake—supported in part by the sale of honey collected from 4-H club hives. He made an enduring impact on many, and for some it was just the beginning of a lifelong mentorship.

For Morris Steen, the influence of Henry Davis extended long after club meetings and summers at Cherry Lake had passed. It was Mr. Davis and a group of 4-H’ers that delivered Morris to Gainesville for the start of his own education at the University of Florida College of Agricultural and Life Sciences. After serving a decorated career in the U.S. Navy, Morris returned home to Taylor County with his wife Judy in 2002 to serve as President of North Florida Community College until his retirement in 2008.

Morris and Judy invest significant time with 4-H including serving on the Henry Davis 4-H Scholarship committee, judging presentations, and leading a fundraising campaign for Camp Cherry Lake as a member of the Florida 4-H Foundation Board. “Mr. Davis was the very first person to make a donation when we started campaigning for the Camp’s pavilion renovation and expansion. He was a big supporter of 4-H camping, and we are grateful to have celebrated the groundbreaking with him,” shared Morris Steen.

Earlier this month, the Steens gathered with Henry and Nell’s daughters, Wanda Davis Holcomb and Sandra Davis Quicke, at 4-H Camp Cherry Lake to view the project’s progress and reminisce about summers at camp. Morris and Judy have established a new endowment in support of facility and maintenance needs of the camp to honor Henry and Nell Davis, who will be commemorated at the camp. A ribbon-cutting and recognition ceremony is tentatively scheduled for March 1, 2021.

“Mr. Davis has been my mentor since I was 13 years old and stands in the company of my father and grandfather in terms of his significance in my life. I don’t know of anyone who has had more influence on the lives of the youth of Taylor County during his tenure as county agent,” shared Morris. “He set the example in everything he did, particularly as a husband to Nell and father to Sandra and Wanda. We watched him closely and the 4-H slogan, Learn by Doing, came alive in our lives.”

Additionally, the Henry Davis 4-H Scholarship Fund, endowed with the UF Foundation in 2017, supports opportunities for Taylor County’s 4-H’ers in citizenship-leadership programs such as 4-H University, 4-H Legislature and camping. If you would like to remember Henry Davis with a gift to this endowment, you can click here to give online. Memorial gifts (payable UF Foundation) may also be mailed to PO BOX 110170, Gainesville, FL 32611. For questions or to discuss giving options, please contact Caylin Hilton at grow4H@ifas.ufl.edu or call 352.392.5432.

As we celebrate National 4-H Week with a vision for #Opportunity4All youth to learn and grow as leaders, we honor and celebrate those who have opened doors for young people throughout the history of 4-H. We will build on their legacies as we strive to reach more youth and overcome obstacles to success.

4-H is the youth development program of the Cooperative Extension Service. In Florida, 4-H is a program of the University of Florida Institute of Food and Agricultural Sciences and Florida A&M University. The UF Foundation and Florida 4-H Foundation are 501c3 organizations supporting Florida 4-H. Your gift to 4-H may be considered a charitable contribution for tax purposes.

Caylin works with UF/IFAS Advancement and the Florida 4-H Foundation to connect supporters with programs they care about. She enjoys meeting fellow 4-H alumni and friends, and connecting people and organizations with the 4-H mission. ...