Situation: During the growing season, eight out of ten lawn problems in Osceola County caused by take-all root rot. The disease is known to affect all warm season turf grass species. Not all turf species are equally susceptible to take-all root rot and not all species express the same symptoms. Take-all root rot is caused by the fungus Gaeumannomyces graminis var. graminis (GGG). The disease not only affects roots but also found on rhizomes and stolons. The disease mostly occurs in the wet, humid summer months. In the summer of 2018, we did a take-all root rot trial on four species of warm season grasses, two cultivars of each species. St. Augustine: Floratam and Bitter Blue; Bermuda: 419 and Celebration; Zoysia: Empire and Jamur; Bahia: Argentine and Pensacola.

Procedure: A completely randomized block design consisting of four replications of square meter plots was established. Each plot was inoculated with oats infected with GGG, 21 days after establishment at a rate of 28.3 g per plot. Treated plots were scalped, fertilized at two times the recommended rate, and were limed despite a proper pH. The control plots (also infected) were cared for according to BMP recommendations. Data was collected starting 38 days post-inoculation. Percentage decline was collected weekly and later converted to the Horsfall-Barratt Scale. The disease was confirmed via microscopic observation.

Results: Treatment resulted in more disease for all species and cultivars compared to the untreated. Cultivars differed significantly in their disease severity over the season.

Conclusion: The severity of the disease can be managed with best management practices. Bahia grass shows symptoms of take-all but can tolerate the disease. 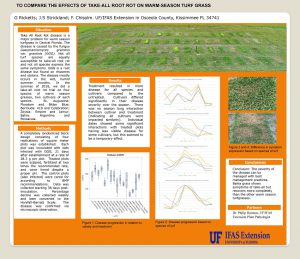