Situation: The bed bug (Cimex lectularius) has become one of the most important insect pests in urban entomology in The United States. Bedbugs can be found in mattresses and found in school items such as books and backpacks. To prevent bedbug infestations, an integrated pest management (IPM) approach must be taken. Identification is the first step in IPM.
Camp Villages is an intergenerational day camp hosted by The Villages. The Villages partnered with UF/IFAS Extension Sumter County to deliver bug camps to their participants. Participants include residents, grandparents and their grandchildren. As a part of bug camp, I teach both grandparents and their grandchildren on how to identify, scout and prevent the transport of the bedbugs. Methods: Three classes were held at Camp Villages in the 2018 calendar year. A total of 90 youth and 90 adults attended the three sessions of bug camp. During the 15-minute demonstration, youth are then given a chance to scout for bedbugs. A miniature bed is used. The bed contains a frame and mattress. The bed has bedbugs placed in strategic locations. Youth work together as a team to scout and find where the bedbugs are. Once identified, the youth then show their grandparents where to look. Results: 100% (n=90) of youth successfully found at least three bedbugs located on the mattress and frame. 100 (n=90) of youth successfully demonstrated to their grandparents where the bedbugs were located on the bed. Conclusion: Information learned is important to prevent the spread of bedbugs. One grandparent reported that her grandchild now asks if the hotels they stay in performs pest management for bedbugs and he inspects their room for bedbug activity. 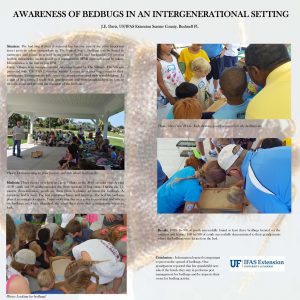