Skip Navigation or Skip to Content
Home » UF/IFAS Extension Escambia County » Weekly “What Is It?”: Sawgrass

Weekly “What is it?”: Sawgrass

Spend just a few minutes trying to wade through sawgrass (Cladium jamaicense), and the origin of the “saw” moniker is evident. This relatively tall (9-12 feet) wetland plant is bordered on its long blades and on the underside of its midrib by serrated, knifelike edges. The second half of the name is a misnomer, as sawgrass is not a grass at all, but a sedge. Those who have taken our Master Naturalist classes will remember the phrase, “sedges have edges, rushes are round, and grasses have nodes all the way to the ground.” 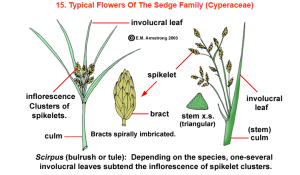 These three types of herbaceous plants can be differentiated by feel, including the shape of their stalks/blades in cross section. A sawgrass plant, if rolled between your fingers, has noticeable edges in an almost triangular shape.

In the field, sawgrass is easy to recognize. The leaf blades are stiff and relatively heavy, folded into a “V” at the vein. They typically bend over from their own weight about 2/3 of the way up the plant. Sawgrass is an excellent indicator of the border between a salt marsh and a freshwater marsh, as it’s often the primary species along the edge of a transition zone where salinity drops closer to zero. Sawgrass produces flowers throughout the spring and early fall, which give the appearance of spiky, multiple headed grains. Inside the flowers are fleshy round seeds called achenes, which are an important source of energy for migrating waterfowl.  Achenes can float, and may also be dispersed by attaching to passing animals, getting picked up by ants, or being blown by the wind. If the fruit survives an animal’s digestive tract, one study showed they had a 94% success rate in germinating—likely due to the added fertilizer they land in once excreted.

Sawgrass has long been the predominant plant species in the Everglades, encompassing acres of watery land through south Florida. In fact, this species was the inspiration for the title of Marjorie Stoneman Douglas’s landmark 1947 environmental history book, “The Everglades: River of Grass.” Unfortunately, saltwater intrusion from excess freshwater usage and sea level rise are causing a decrease in sawgrass habitats due to their preference for fresher water. For the earliest human inhabitants of Florida, including members of the Seminole tribe, sawgrass was an ideal source of raw material for making baskets and medical implements. The heart of the plant at its base is also edible.  In addition to using it as a food source, ducks and other waterfowl use dense patches of sawgrass as nesting area.