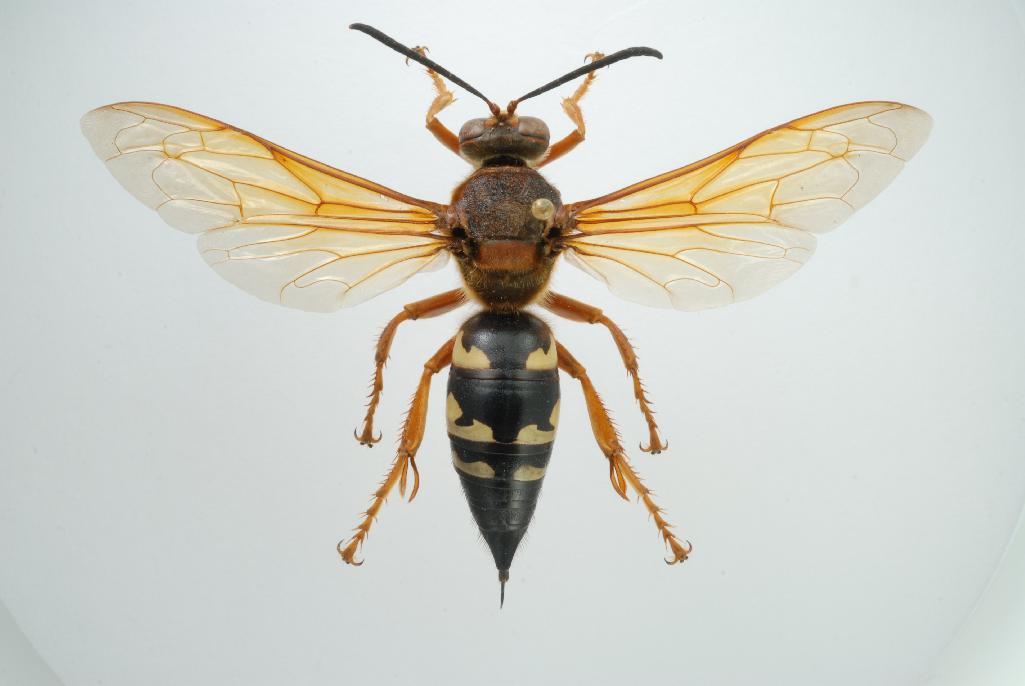 This is a guest post by Lauren Webb, a research assistant in the Dale Lab in the UF/IFAS Entomology & Nematology Department.

Have you ever seen a wasp nearly the length of a large paperclip? Perhaps on the ground or flying around? Maybe it was a little standoffish as you stood too close to its perch. Or maybe it was attacking an insect that was even larger than itself. If so, you may have come across Sphecius speciosus, commonly known as a cicada killer wasp. Like many other wasps, these are parasitoids—insects that deposit their offspring in or on living hosts. The deposited egg goes on to develop inside the host before ultimately killing it and emerging as a fully developed insect. In nature, parasitoids come in all shapes and sizes, and are among the most common forms of biological control regulating the abundance of other insects. Cicada killers are one of the largest examples of parasitoids in Florida.

Unlike some wasps, cicada killers are solitary insects, meaning that the females build individual nests and hunt for their own food to feed their offspring. A single female will create about 4 nests in her lifetime, which can go multiple feet into the soil and have several chambers for its offspring. When making a nest, the female may excavate up to half a gallon of soil, which ends up as a rather large mound of dirt. This nest-building can be problematic for some people, particularly in highly managed areas like golf course fairways or greens. A large mound of dirt, plus a golf ball, is not going to keep you under par.

Despite this nuisance, cicada killer wasps do provide some benefits—they attack cicadas.

Cicadas are surely familiar to most people. They are the source of that extremely loud buzzing sound coming from the trees in your backyard all summer. Cicadas are harmless to people, but do feed on plant sap from woody plants like trees and shrubs. They also saw into branches to deposit their eggs, which can cause problems for the ornamental plant industry. When the female wasp is ready to reproduce, she hunts down a cicada and uses her powerful grip to hold it in place and inject with a paralyzing venom. Once the cicada is sufficiently paralyzed, the wasp will make the laborious journey carrying the cicada back to her burrow. A single female may collect up to 100 cicadas in her lifetime, putting one in burrows for her male offspring and three in burrows for her female offspring. That’s right, she knows in advance, the sex of the eggs she is laying.

Deep in the burrow, the wasp will lay an egg at the base of the cicada’s middle leg. She will then leave, close up the chamber, and never return. Her egg soon becomes a larva, which gradually consumes the cornucopia of cicadas she left behind. Once the larva is finished eating, it spins a cocoon, pupates, and spends the rest of the season underground in solitude.

Now the important question (for most people) is: Will these giant wasps sting you? The answer is no. Both male and female cicada killers are relatively harmless. Males are territorial, but they have no stinger. Females do have a stinger but will not use it on a human unless forced to (for example, if you grab it).

For more information about cicada killers and other interesting insects, visit UF Featured Creatures webpage. For updates on insect research urban landscapes, visit adamgdale.org or follow @adamGdale on Twitter (there is a video of a wasp carrying a cicada).