Skip Navigation or Skip to Content
Home » UF/IFAS Entomology and Nematology Department » Are Ladybugs All Ladies?

Are ladybugs all ladies?

The ladybug (Figure 1), or ladybird, is the common name given to beetles in the Coccinellidae family. This is misleading because not all ladybugs are ladies; they can be either female or male. It is difficult to determine the sex of a ladybug, but females tend to be larger than males. People, mostly children, are confused by the name. Why else would the beetles all be called ladies? It is not unreasonable to think only females exist. There are various insects that are parthenogenetic, which means they do not require a male to mate. These insects only produce female offspring, but that is a topic for a different article altogether! The ladybugs’ favorite food sources can actually reproduce via parthenogenesis, such as some species of aphids and mealybugs. 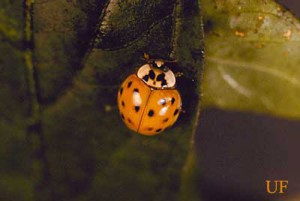 As it turns out, the name was shortened from “beetle of our Lady,” which Europeans coined in the Middle Ages. Pest insects had been devouring crops, so farmers prayed to the Virgin Mary for help, and when ladybugs miraculously came to eat the pests, they believed it was a gift from their Lady.

Today, we still value the economic importance of these beetles. The red and black (and sometimes orange) coloration may be a deterrent to predators, like birds, but people recognize the familiar, usually-spotted insect as a garden and crop helper. To learn more about these beneficial organisms, watch this video here.