Hiking, biking, or kayaking in Florida has always presented opportunities to see large reptiles. Florida is famous for its alligators and crocodiles. Even skinks, while not exactly Godzilla-sized, can get impressively hefty. And the state boasts some pretty sizeable native snakes. Over the last few decades with the “runaway train” reptile invasion, however, Florida has emerged the unchallenged champion for heart-rate-elevating encounters with large reptiles. Among them… the tegus! 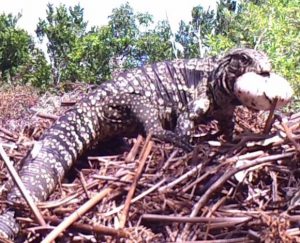 Tegus on the Move

A recent EDIS publication, Growth and Spread of the Argentine Black and White Tegu Population in Florida, focuses on the expanding foothold in Florida of these large, destructive lizards. It focuses specifically on the growth of tegu numbers and their successful invasion of increasingly greater areas of Florida and even parts of Georgia.

Like boas, iguanas, and Nile monitors, these four-foot-long bruisers are wreaking havoc on native species. They eat everything–fruits, vegetables, insects, small animals, and eggs, including those of alligators, crocodiles, and sea turtles. Tegus are established and breeding in Hillsborough, Miami-Dade, and Charlotte Counties and are emerging in St. Lucie County. So far they have been spotted in 35 Florida and four Georgia counties.

The key to controlling this burgeoning problem is to prevent tegus from establishing breeding populations in new territory. If we let them, tegus will march northward. Unchecked, they could grow to numbers that would be extremely costly to manage. Several agencies have combined forces to contain tegus. The key is to find, track, and remove them as they attempt to move within and outside Florida.

Please report sightings of tegus, and any invasive plants and animals, to IveGot1.org.