Got Problem Frogs? EDIS Has Answers.

A small, socially distanced backyard get-together is coming to its fun-filled conclusion on a chilly early spring night in north central Florida. A campfire, s’mores, popcorn, and a movie… What’s not to love? But then… the frogs… 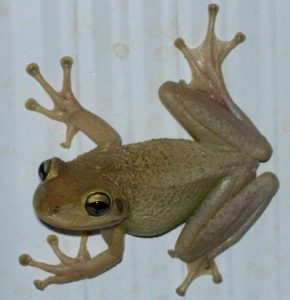 Invasive Cuban tree frogs can really put a damper on your fun. They live in most areas of Florida and might venture into your yard or even come inside your house. To find out how to how to identify them and what to do if they crash your party, explore the EDIS publications The Cuban Treefrog (Osteopilus septentrionalis) in Florida by Steve A. Johnson and How To Make a Treefrog House by Monica E. McGarrity and Steve A. Johnson, both published by the UF/IFAS Department of Wildlife Ecology and Conservation. And now… the chilling story of the frogs that came to the movie party. 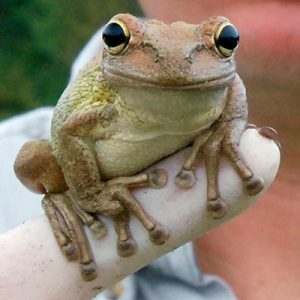 A tiny group of friends have spent a couple of hours of most Sunday mornings since last spring working together in our backyards, socially distanced and masked, of course, having great if sometimes sweaty fun uprooting bamboo and tearing out wisteria, nandina, cat’s claw, coral ardisia, and ivy. After almost a year of work, our yards look lovely, and, best of all, we’ve cleared enough ground in this one to set up a movie projector, a screen, and our lawn chairs, all six feet apart! Now we can finally all watch the same movie at the same time in the same place and laugh together, instead of trying to text LOLs to each other from our separate sofas.

We’re snuggled under blankets in our lawnchairs with our popcorn watching Napoleon Dynamite under the stars. Suddenly, just as Napoleon begins his dance routine, a circuit trips and the screen goes black. We all wail, but none louder than the homeowner, who tells us that Cuban tree frogs lurk in the niche for the circuit breaker panel, waiting to leap on anyone who opens the door. 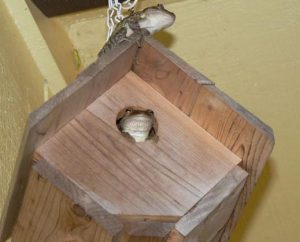 We troop back there and shine our phone flashlights through the crack between the door and the doorjamb. And sure enough: we can see their golden eyes and their sticky toe pads. Three of them! That’s a crowd. We have a serious problem. If we can’t access the circuit breaker, we won’t be able to get the power back to the projector so that we can watch the end of the movie.

We may never find out if they voted for Pedro!

What are Cuban tree frogs and why should we care? 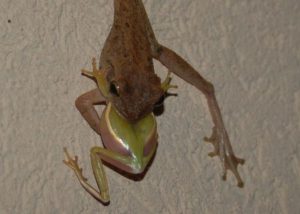 According to The Cuban Treefrog (Osteopilus septentrionalis) in Florida, Cuban tree frogs probably came to Florida in shipping crates from Cuba, the Cayman Islands, and the Bahamas. They first drew attention to themselves in the state in the 1920s and have fared well here ever since, outcompeting our smaller native tree frogs and steadily taking over more and more territory. In yards and neighborhoods they can become a nuisance to people in various ways. Their droppings can create an unsightly mess. They clog plumbing. They may dissuade birds from using nesting boxes, and their skin secretions burn our eyes and noses. And, like our party crashers, they can lurk in and around our houses waiting to leap on us. 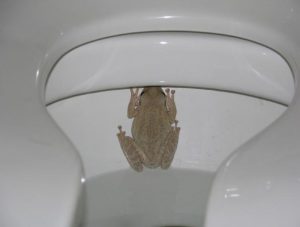 Nope! Movie night resumed after a brief intermission. Because some members of Sunday Yardwork Club had read the EDIS fact sheets about them, we knew we could capture the Cuban tree frogs. And we knew that Cuban tree frogs are not scary.

Fortunately, it was a cold night, and the frogs, being amphibians, were chilled to near immobility. They could not move to evade capture, so even our nervous, hesitant efforts with the shopping bag were successful. How did Sunday Yardwork Club, rattled as we were, manage to recall that the solution to our problem was a simple plastic shopping bag? Simple: EDIS again. Specifically, it was this unforgettable photograph: 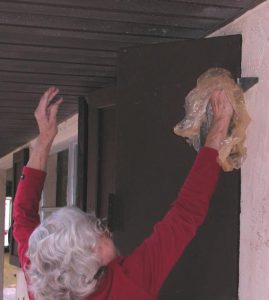 Once caught, invasive Cuban tree frogs should not be released. Not only are they a nuisance, but worse, they hog up habitat and resources that support native species, and they eat anything they can fit in their mouths, including native frogs. The clear, easy instructions Sunday Yardwork Club followed to dispatch the frogs as gently as possible are in The Cuban Treefrog (Osteopilus septentrionalis) in Florida. 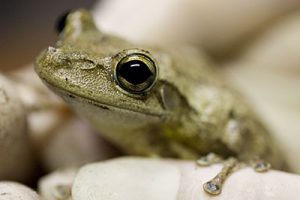 Consult EDIS for more information about Cuban tree frogs and other invasive reptiles and amphibians in Florida. New publications on this and a host of other topics of interest come out every week at https://edis.ifas.ufl.edu.