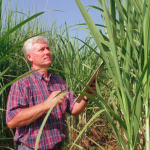 Dr. David Wright, a professor of agronomy with the UF North Florida Research and Education Center, presented a recent seminar on how cover crops and cattle grazing are a BMP to following crops.

Ryegrass and millet are good options for cover crops that are needed for a short period (3-6 weeks). Both covers can be

planted with shallow tillage even though biomass will not be high over a 3 to 6-week duration, but its established root system prevents erosion. Ryegrass is an inexpensive cover crop and can be planted year-round (mostly used in the fall and winter) but must be watered as it warms toward summer because it cannot survive hot and dry conditions. Millet will sprout with heavy dew and establishes a root system quickly (although not much biomass in 3-6 weeks). A frost will kill millet and it along with ryegrass are good for cheap, short-term cover crops.

A long-term systems trial has been in effect for the past 20 years at the NFREC Marianna where cattle grazing winter cover crops of oat/rye has been shown to be a BMP for following crops. Winter grazing before planting peanuts and cotton leads to doubling root mass of these crops as compared to planting into non-grazed cover crops which then requires 40-70% less irrigation along with 30-50% less nitrogen needs for cotton. Cotton yield is often 150-400 lbs. higher following grazed cover crops vs. non-grazed cover crops. Grazing results in roots of following crops to grow deeper and faster, which results in better drought tolerance. This has shown up in peanut as having less aflatoxin. A high adoption rate of grazing cover crops ahead of summer crops in areas where irrigation is prevalent would result in higher spring flows, according to models. Maintaining high spring flows in Florida would result in less nitrates due to dilution alone. Our data shows less applied N is needed after winter grazing due to recycled nutrients by livestock which would further reduce nitrates in ground water.

Grazing cover crops improves water quality because it conserves water, reduces nitrogen needs, protects stream water levels, reduces leaching from rain and irrigation, lowers discharge of nutrients and pesticides into streams, and reduces soil movement. Farmers also enjoy reduced risk in their operation because of increased yields and quality and reduced inputs. Both crop growers and cattlemen benefit from this arrangement because crop yields are higher, and calves gain more weight due to higher quality and more abundant forage.

Even though there are many benefits that result from adopting these BMPs (especially grazing cover crops ahead of summer row crops), some farmers are deterred due to costs of building infrastructure such as fencing or water wells for cattle or purchasing expensive cover crop mixes. Approximately 10% of producers are currently implementing this BMP. IFAS is working to find ways to assist farmers in adopting these BMPs through increased incentives funding and developing better infrastructure for the project. Farmers that see how grazed cover crops are benefitting following crops and viewing the results of research along with incentives for building infrastructure will improve the rate of adoption by other farmers.

Questions about grazing cover crops can be directed to Dr. David Wright. Watch the recording of his webinar. View the PDF of his presentation.

Q: Some growers complain about controlling rye grass after using it as a cover crop. Do you have any tips?

A: We generally do not like to have rye grass as a cover ahead of row crops because of its competitiveness even though it is a high-quality forage; it’s a cheap cover crop. Roundup can control ryegrass at times, but at different stages of growth it can be harder to control. You can use more expensive herbicide like Select or Poast to control it, but it’s 3-4 times more expensive than Roundup. So, it can be controlled, but in a lot of cases it’ll be more expensive if not controlled by Roundup.

Q: Do you have a take on the state of science that links cover cropping and other regenerative agricultural practices to carbon sequestration? The Yale Climate Group recently published an article that essentially says the jury is still out on this, but there is another group with a study that says it’s there.

A: Cover crops are good for providing ecosystem services. Growers have talked about that, and a buzzword right now is “regenerative” referring to soil health. There are a lot of ways and mixes of cover crops that can be used to do different things; e.g. enhance nitrogen or soil microbiology. However, my take on it is that grazing cover crops is regenerative because of the many benefits that we discussed today that leads to higher OM, nutrients recycled, better water holding capacity and impact on the following crops for sustainability. Grazing cover crops is the next giant step after cover crops and conservation tillage because it gives you additional benefits that cover crops alone does not including enhancing organic matter and microbial population which is sequestering carbon and increased yields of following crops in the first year with less inputs. There can be challenges with livestock such as a farmer in the Jackson Blue watershed that farms several thousand acres and has 1200 acres in winter grazing, and he said that cattle like to walk in tracks. Where the irrigation pivot tracks are, if it goes downhill, they’ll walk down these and there’s more erosion than if he just has cover crops without grazing. But he said there’s no comparison in his yields and inputs, and that’s why he’d like to have more of his cover crop acreage grazed prior to his summer cash crops which is regenerative to the many soil aspects that were discussed and showed data on higher yields with less inputs. However, the infrastructure is not available in many fields, such as fencing and water wells for livestock. This is where the different conservation agencies, e.g. water management districts, can help growers with incentive payment for establishing infrastructure.

Q: For grazed cover crops, were you able to determine the soil nitrogen contribution from the cover crop versus animal excrement?

A: No, but we need someone to work on that aspect. We do have research on grazed vs non-grazed area, and we know that we have a more nitrates left after cattle have grazed, so I think that a large component is from cattle, but we do not have the research to confirm this at this point.

Q: Do you have to add fertilizer to the bahia grass when it is grazed, or are the recycled nutrients enough?

A: We usually do use some fertilizer, but most of the growers do not have bahia grass. In our system in Mariana we do have cattle and bahiagrass and have been using nitrogen on that system. If we use legumes in the winter; because we do over seed everything in the winter (after cotton, after peanuts, after bahia), we would have more nitrogen in the system left for the bahia grass if we had winter legumes before the cotton summer crop. It’s a beef unit so there are a lot of cattle on it. In the winter we may have half the herd on a 900-1000-acre farm on about 150 acres, so we do use nitrogen to provide more forage.

Q1: There’s a lot of evidence of increased soil carbon with cover crops, especially with grazing. Grazing intensity is a major component of the equation. Heavy grazing always has negative impacts, but moderate grazing can increase total biomass production and increase several benefits that you mentioned. If these integrated systems have so many benefits, how can we enhance adoption?

A1: In general, what we have found on cover crops over the last 20 years, is it has been over grazed due to shortage of forage for cattle in the early spring and sometimes in late fall. Normally, when we would plant cotton and peanuts at the end of April-early May, its dry and the bahia and bermudagrass has not started growing on the rest of the farm and they’re short on forage. There have been many cases where the beef manager will ask to keep the cattle on the winter grazing a week longer to utilize all of the high quality winter crops leaving little residue to plant into, and so it seems like even though we’ve been overgrazed, we’re still getting these benefits. Especially the winter grazing – we’d prefer to have a more residue that we could plant into to get some of the benefits from the soil health and following crop; e.g. keeping the soil cool, reducing erosion from heavy rains. Growers are beginning to adopt this practice as we have encouraged growers to try it on their worst field where maybe they have never made a profit. I think we are in the beginning but growing phase of this practice in the SE.

Q2: Based on the evidence you provided and that others have done; the system provides a lot of benefits so why aren’t more people doing it? I think you touched on that earlier – if you’re not in the cattle business then it’s a big jump to get in there, right?

A2: I will say that if I asked growers 10 years ago in winter meetings how many are doing this, you may have gotten one hand that went up. I always say to growers, try it in your worst field because that’s where it really shines. Now, when I ask this same question at meetings with 60-100 farmers, there are 5-7 hands that go up. They say they’d like to do more on their farm, but they need to fence it and fencing is expensive; they’re not able to get help for perimeter fencing but they can for interior fencing. We need to figure out a way to help growers do this, and if more funding for growers then they would do this. It’s going to take a while because we do not have the infrastructure that we did in the 40’s and 50’s – growers used to have a livestock on every farm, but now only about 25% of our growers in FL, GA, and AL have it.

Q: How many growers in the south GA/north FL region with row crops use cover crops? And how many are using them with best practices?

A: Not a high percentage – about 10%. This is because it’s going to cost them about $30-50 per/acre to establish a mix of cover corps. A lot of them may leave the old crop residue out there. We do have a lot of people doing strip tillage. And in terms of best practices, not a lot are doing everything we would recommend; they’re doing minimal things, but much of this again, is due to cost. It would help to have incentive payments for cover crops and fencing, cattle handling facilities, etc..

Q: Is there anyone doing similar research in the southern half of Florida?

A: Not that I’m aware of, but we’d be happy to work with people. We think it has broad application, but we need to have the data to show growers. As more and more growers do this, their neighbors also start to do this too.

Q: Are there any benefits of combining cover crops with grazing for pest control?

A: We have data looking at systems where we have bahia grass in it and have shown reduced nematodes, thrips, and tomato spotted wilt on peanut. But we have not looked at plant health in grazed vs non-grazed systems. So that’s something else that certainly can be looked at.