Skip Navigation or Skip to Content
Home » UF/IFAS Extension Clay County » My Journey To Becoming A Monarch Butterfly Garden Part 2: The Life Cycle Of The Monarch

My Journey to Becoming a Monarch Butterfly Garden Part 2: The Life Cycle of the Monarch

So, as I said in Part 1 of My Journey to creating a monarch butterfly garden, we released about 25 Monarchs in the course of 4 months that first year. Those 4 months were the last 4 of the year. What I did not know at the time was that in September the mating stops so that the last generation of monarchs will migrate south to overwinter. I was told, by a very wise Master Gardener that we should cut our Milkweed down to about 6 inches in the beginning of October so that we do not encourage the monarch’s to stop and lay eggs and thus interrupt their migration.

Over the summer, three or four generations of Monarchs are produced. They only live three to five weeks, except for the last generation, which then migrates to warmer climates. During the summer months, the female lays her eggs on milkweed plants, one by one.

The larva, or caterpillar, hatches and first eats its egg shell, then begins feasting on the milkweed. The larva will eat and grow until it no longer fits into its skin. When this happens, the old skin will split and the larva will wiggle itself out of the old skin and will eat the old skin before moving on to eat more milkweed. (Kind of like us and our jeans, but we don’t eat them, we pass them on to our little sister! But I digress!) This process is called “molting”. It will molt up to four times before its final molt when it becomes a pupa or chrysalis.

When the larvae begins to form a chrysalis, it will find a spot away from the milkweed and attach itself with silk by the tail and its skin will slip off and it will become the pupa. It will hang like this for about a week when the beautiful new monarch emerges from the chrysalis.

The new butterfly will hang there for a couple of hours while its wings get strong enough to fly away to begin a new cycle. 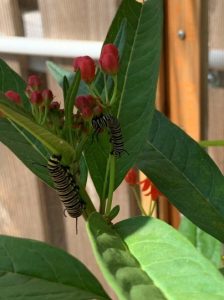 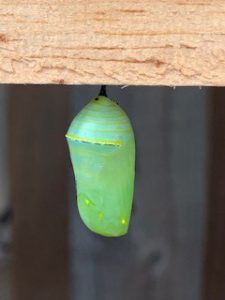 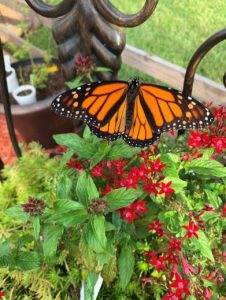 My husband, Ron and I, decided that we needed to help them along. Ron built a cage “The Cac 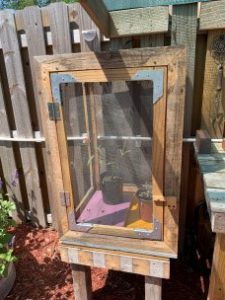 ooninator” to house the caterpillars. It is large enough to house a couple of potted milkweed plants. We would scour our milkweed plants daily in search of baby caterpillars and put them in the cage with the milkweed plants. There they would eat and grow until it finally made itself into the chrysalis. After about a week, the new butterfly would emerge. After we were sure it was strong enough to fly, we would open up the cage and let it go. It is a very interesting process to watch!