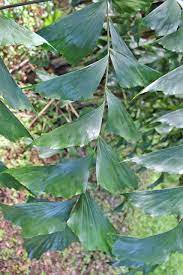 Fishtail palms (Caryota mitis) are distinctive in appearance and get their moniker from the unique shape of their leaflets which resemble the tail-fins of many common fish. Unlike most landscape palms, Fishtails can tolerate growing in shade, which makes them a popular choice for interiorscapes and as indoor potted plants.

Fishtail palms have a clumping growth habit with multiple stems arising from a central growing point. At maturity, Fishtail palms can be up to 15 ft. wide and 25 ft. tall, so when choosing a planting location, it is important to ensure that enough room is allowed for them to reach their mature size. Due to prolific bearing, Fishtail palms have been designated a ‘caution’ category plant on the UF/IFAS Assessment Invasive Species list for South Florida. Click on the links to learn more about invasive plants and Fishtail palms 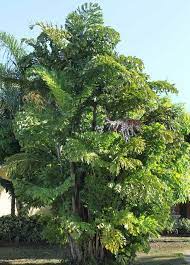 Spider mites are the most common pests of fishtail palms, especially when they are grown indoors. Fishtail palms are also susceptible to lethal yellowing disease which shows up as a progression of yellow tissue from the tip of the frond to the base of the trunk. Click on the links for more information on spider mites and Lethal Yellowing

As mentioned in our previous blog posts about caring for palms, when pruning palms, green fronds should never be removed, because palms recycle nutrients from the older outer fronds, to the newer inner fronds. Only spent flower stalks, immature fruit, and brown fronds should be removed during pruning. Over-pruned palms are more susceptible to nutrient deficiencies, pests and diseases.

Click on the link to learn more about pruning palms.