Deworming strategies have evolved over the years to accomplish three main goals:

-Reduce the use of drugs in food animals.

In most herds, 20% of the animals shed 80% of the parasite load. Therefore, in small herds it is more economical to treat only the most infected animals, this practice is used in equine and small ruminant operations. In larger production herds such as cattle, animals should be treated as management categories and each category be treated according to their risk. In large small ruminant production systems, a percentage of animals should be tested to determine if the herd needs to be treated.

Deworming protocols for every operation should be developed with a veterinary consult. Protocols will vary based on the type, location, herd, and individual animals of an operation. The southeast United States is the ideal breeding ground for parasites year round so it is important to manage parasites all year. 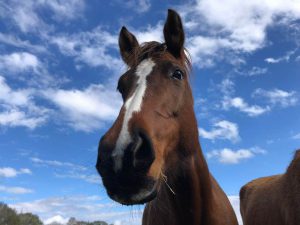 Florida peak season for equine parasite infections are spring, fall, and winter, treatments should be focused during these time frames. Operations should be utilizing fecal egg counts to determine which horses have a high enough parasite load to justify treating and which horses will not need a treatment. Fecal egg counts are often a small cost through your veterinarian and often do not require a farm visit. Horses with a fecal egg count higher than 500 should be treated based on the species of eggs present, a veterinarian should give the recommendation on which dewormer to use to provide the most effective treatment.

It is important to note that fecal egg counts can not identify tape worms, therefore horses should be treated with praziquantel biannually or annually.

Equine deworming should focus on prevention and control through the use of management techniques: 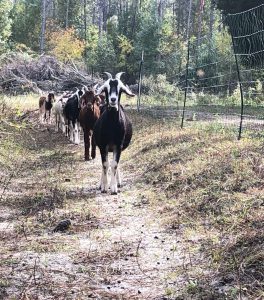 Sheep & Goat deworming treatments should be made using FAMACHA or fecal egg count (FEC) scoring. FAMACHA scoring is a practice that determines a small ruminants anemia level, and therefore its level of parasite infection. FEC scoring, like in other livestock species, is the practice of counting parasite eggs in a fecal sample. FEC scoring can give a more specific recommendation since species of parasite can be determined, this leads to a more targeted deworming protocol.

Livestock producers can benefit from the use of mixed species grazing. Grazing small ruminants after horses or cattle can help break parasite life cycles since the same parasites do not inflict small ruminants and other livestock. Utilizing this grazing strategy can increase forage utilization while still allowing longer periods between when a particular livestock species is re-introduced to a pasture, reducing the parasite load over time. 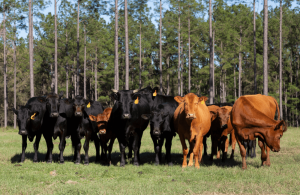 Deworming strategies for cattle are unlike other livestock species since they are treated by management category and not by individual animal. Cattle parasite control methods focus on stomach and intestinal worms, lung worms are often controlled with a proper intestinal worm control program and liver flukes are not a problem on every Florida cattle operation.

Parasitism in cattle is a herd wide issue. Focusing treatments methods on the most susceptible animals and separating treatments by management category can reduce production costs while accomplishing three goals:

-Improving overall production of the herd

Nursing calves, stockers, and replacement heifers (any cattle pre-weaning to a year after weaning) are the groups of cattle most affected by parasites. These management categories are most susceptible to clinical affects of parasites such as poor performance or death, they also are the heaviest shedders of eggs and the reason for most re-infection. Mature cattle have a strong enough immunity to resist ill effects of parasites but poor body condition associated with heavy loads of parasites can affect reproductive efficiency. Control of parasites in younger cattle will reduce needs of treatment of mature cattle.

Although long pasture rotation times (in excess of 6 months) can break parasite life cycles and reduce the need for dewormers, this is not generally a feasible production style for Florida ranchers, therefore strategic deworming is necessary. Strategic programs should be developed with these four core production aspects in mind:

-Time of year grazing begins. Since cattle are infected with parasite eggs through grazing, grazing seasons will determine potential parasite loads and timing of treatment.

-Age/Category of animals. Management categories of animals will determine whether it is economically feasible to work animals in order to deworm and can allow for appropriate timing of deworming protocols.

The two parasites of most economic importance in the southeast US are brown stomach worms (active November through February) and barber pole worms (active June through September).

All approved cattle dewormers are effective against all species of adult parasites, selection of specific dewormers is important when trying to control larvae or liver flukes. There are products that can effectively dose dewormers without having to work cattle, such as blocks, salt/mineral mix, top dress, cubes, and others. These products can be beneficial if working cattle at the time dewormer is needed is not ideal or does not fit into other production practices (calving season, working calves, etc.)

All Florida pastures that currently, or have had cattle on them in the last 6 months, have parasites present. However, every Florida pasture does not have liver flukes. Before selecting liver fluke specific parasite products it is important to test for fluke eggs in manure or check for fluke damage in a cull cows liver.

Adult cattle have a strong immunity to parasites and generally anthelminitic (parasite control) treatments do not provide a return on investment unless cattle are showing clinical signs of infection (severe weight loss/anemia). Immunity to worms forms about one year after weaning. Therefore, treatment of calves and weanlings is the most critical and will provide the most return on investment.

Make sure to have a bio-security plan in place. Separate and treat any new herd animals before co-mingling with established herd, this helps to reduce parasite loads and ensures your deworming plan of action is most effective.

Summer treatments, especially those with larvae inhibitors, are highly effective in reducing overall pasture contamination and fall re-infection rates. Summer treatments should use products such as Panacur at double dose (fenbendazole), Ivomec (ivermectin), Valbazen (albendazole), or Synanthic (oxfendazole) as these are the approved cattle dewormers that inhibit larvae development.

Weaned calves should be treated when they are first placed on pasture.

Treatment for Liverflukes should focus in Spring (March/April) with Curatrem (clorsulon) as it is effective against both mature and immature bots, and fall (October-December) with Valbazen or Ivomec F as these are effective only against mature bots. Treatment in late summer/early fall is helpful to reduce fall infection of snails with the fluke larvae.

In general, deworming strategies should be matched with other production goals and timelines to ease stress on cattle and provide the greatest return on investment.