Both African and Asian elephants are in danger of becoming extinct. Latest surveys report that wild populations of African elephants are much lower than anticipated. With current rates of poaching, some estimates have elephants going extinct in the wild in the next decade.

Dr. Chris Mortensen a researcher from the University of Florida is leading a team of experts in conjunction with conservation centers and zoos to learn more about elephants. He and his team hopes their crowd-source funding effort will generate critical data that will 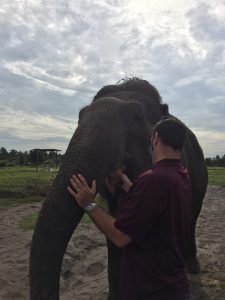 Mortensen explains that zoos and conservation centers are often a species last hope of survival. “With current population estimates, most likely elephants will go extinct in our lifetime,” he said. Mortensen went on to compare the elephant’s plight to that of the Northern white rhinoceros. “Due to poaching and other human pressures, there are only three Northern white rhinos left in the world.” He further stated, “I am working with some of the reproductive experts who are trying to save this species (Northern white rhinoceros), and the general feeling is it’s much too late for them.” Mortensen went on to state “Now is the time to take action for elephants, we can’t afford to wait.”

Currently there are approximately 250 elephants held in protective captivity within the United States at zoos and conservation centers. Mortensen told us the importance of zoos to conservation. He said, “With reports from just a few days ago about the vast devastation to the Earth’s wilderness, there is nowhere for these animals to live. So zoos and conservation centers are quickly becoming the last refuge for many species, especially elephants.” He also indicated that if we can’t learn more about these species while in captivity, when there is an emergency in the wild like the current cancer crisis with Tasmanian devils or animals go extinct in their natural habitats, we will not have the information needed to save them. “That is why I believe so much in the missions of accredited zoos and aquariums, they have been critical in saving many species from extinction,” Mortensen said. He went on to use the Przewalski’s horse, Arabian oryx, and even the Oregon silverspot butterfly as examples of species being saved by zoos and then released back into the wild.

This research is also led by graduate student Ms. Danielle Arnold who is working on studying elephant reproduction for her PhD dissertation. In their video for their recent crowd-sou 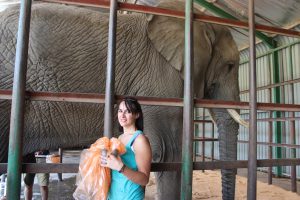 rcing effort through Indiegogo “Preserving the future of elephants,” Arnold states her goals are to study male elephant fertility and investigate better methods for cryopreserving elephant semen. She went on to say this research would make an impact on conservation efforts for elephants and help preserve important genetics.