Your county UF/IFAS Extension office houses agents with expertise in many different fields; depending upon your needs and interests, you may be familiar with some of our agents, but not others. This is the first in a series that will explore the work extension agents do in the field. Today we’re literally going out to the field to meet extension agriculture agents. 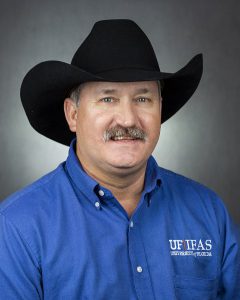 Farmers and ranchers in the Panhandle know Doug Mayo as a trusted source of information about everything from reducing cattle stress to stocking fish ponds. He’s also a living encyclopedia of good clean jokes.

As the Extension director in Jackson County, Doug oversees a team of ag agents that include Ethan Carter, who specializes in peanuts, cotton and other row crops, and Ashley Stonecipher, who works with specialty crop farmers—vegetables, citrus and ornamental horticulture. Doug’s own expertise is in livestock and forages, knowledge he’s been sharing for more than 26 years.

For Doug, every day holds something different. Sometimes he’ll travel to a cattle ranch to see what’s been affecting the health of a herd. Other times he’ll be giving a talk about planting times or pest-tolerant forage varieties. In the middle he might get a text message from a local supply dealer who wants the most effective products for reducing armyworms.

But as Doug would be the first to tell you, becoming the go-to source for critical information doesn’t happen overnight. It comes from a long, intensive process of getting to know your community, being known by them and building relationships.

“You build relationships with every interaction,” Doug says.  From the producer’s perspective, extension agents offer very specified knowledge and expertise. At first, they are usually called on only when needed. But having the right answers at the right time will lead to more questions about other topics. “If you can provide people with useful information that helps them manage their problem, they’re going to save your number,” Doug says. “Eventually it gets to be on speed dial.”

Once an agent has a producer’s ear, it becomes easier to talk with them about things like earth-friendly, sustainable agriculture practices. Doug puts a lot of work into planning short courses, field days, and other educational events.  “If you want people to make a change, you’ve got to give them an incentive,” Doug says. “People won’t attend a field day to learn about best management practices alone, but if you mix it in during a farm tour, farm visits, information about cost share funds, they’re more receptive.”

It takes a lot of dedicated people work.

“It’s not an easy fit for introverts,” he adds.

One of the ways Doug reaches his clients is through an online newsletter, Panhandle Ag e-News. Written by extension agents throughout the Northwest District, it covers the latest news, field trials and upcoming events. It’s been published every Friday since 2012. “I never thought I would be known as an expert blogger, but 10 years later that’s what people know me for,” he says.

For a long time, the feature that readers most looked forward to was Doug’s Friday Funnies, a series of jokes you can repeat in mixed company.  But Doug hasn’t updated his repertoire in a while. 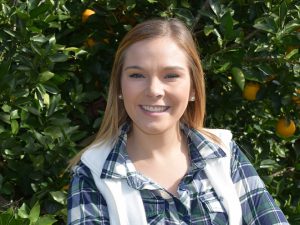 Last month, Danielle Sprague took home a national award from the National Association for County Agricultural Agents. She’s also been nominated by a local chapter of the Florida Farm Bureau for Extension Agent of the Year.

But five years ago, when she first started as an agriculture and natural resources agent in Jefferson County, she had her doubts.

She had a master’s degree in Entomology from UF and did her graduate research studying insecticide resistance in thrips at the North Florida Research and Education Center in Quincy, but she did not have a lot of experience with agricultural extension. She was going to be in Monticello working with producers who had been farming for generations.

“It was definitely overwhelming,” she says. “I thought I knew what Extension was, but I soon learned there was a lot more to it than I knew.”

Early on, she received some advice from Doug Mayo: “People don’t care how much you know until they know how much you care.”

She took time and worked hard to meet people in the agriculture community in Jefferson County, joining Kiwanis and showing up at every Farm Bureau and Soil and Water Board meeting. She learned that the county chapter of the Florida Cattlemen’s Association hadn’t held a meeting in over 12 years, so she worked to resurrect the organization.

Her background in entomology also helped her connect with kids. With the 4-H agent in Monticello, she organized Field-to-Fork camps to help youth learn more about where their food comes from and that you don’t have to grow up on a farm to have a career in agriculture.

That’s something Danielle knew from experience. She grew up in Vero Beach wanting to be a nurse. It wasn’t until she was a junior high school that a friend encouraged her to join 4-H. With the help of a host family, she raised hogs on their small farm and sold their vegetables at a farmers market on the weekends. The experience inspired her to switch from nursing to agricultural science.

Danielle now works in Gadsden County, where her expertise is helping citrus growers. They often send her photos or call and ask her to identify the pests that are damaging their groves. If she doesn’t know the answer right away, she’ll research until she finds it.

For Danielle, the important thing is not just having the answer, but understanding the question and caring enough to find a solution. “I listen and I show that I care and that I want to learn and help them,” she says. 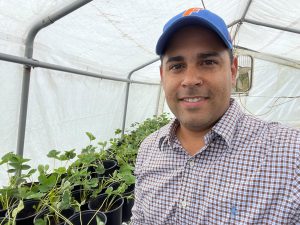 Reading and research is also a big component of Jonael Bosques’ work. He specializes in animal science and community resources, but as the Hardee County Extension director, he has to wear a lot of different hats. In addition to making farm visits and overseeing his faculty and staff, he produces videos and prepares educational courses about beef cattle production, beekeeping, vegetable gardening, civic engagement, even paleontology.

“Every day is different,” he says. “Some days I don’t have any meetings, but on those days, I learn.” To prepare for an upcoming class about sheep and goat production, he researches methods for doing fecal egg counts, combing through the scientific literature and distilling it down to a set of procedures that his audience can easily implement. Later he’ll turn these into a blog, a fact sheet or a video.

He also translates his educational material into Spanish. Nearly 30 percent of Florida’s population is Spanish-speaking, but Extension outreach to the Latinx community still has a long way to go. The main challenges, Jonael says, are marketing and resources. “We can put the best program together, but the channels to communicate them to Spanish speakers in their native language aren’t there.” Café Latino, a UF/IFAS faculty initiative to serve Spanish-speaking communities, has made inroads, but much remains to be done.

The best thing about his job, Jonael says, is the freedom and variety of his work. “I come in every day and there’s a different challenge,” he says. “I learn from it, I adapt, and then I use that challenge to teach somebody else to increase their awareness of an issue. I’m a nature nerd and an agriculture nerd and I enjoy learning and information.”

Doug, Danielle and Jonael are just three of the agriculture agents working in county Extension offices and research centers throughout Florida. Together, they apply University research and their own skills as educators to help Florida’s growers remain profitable while preserving natural resources.

To learn more about the UF/IFAS Extension agents in your county, visit sfyl.ifas.ufl.edu.

Learn While You Rake with these UF/IFAS Extension Podcasts
This Hurricane Season, Be Prepared for Anything
Food is Too Precious to Waste

This Arbor Day, Plant an Investment in a Greener Future
Preparing for Hurricane Nicole
This Thanksgiving, Thank a Farmer

Dr. Andra Johnson is the dean of UF/IFAS Extension and the director of the Florida Cooperative Extension Service.