Brittany Bankovich is a GIS analyst at FWC. She went to undergrad at the University of Akron, where she was on the varsity swim team, and planned to become a veterinarian. After graduation, she took a series of interesting wildlife field volunteer positions and jobs that led her instead to her current position. Brittany studied feral hogs in the Wisely lab for her MS in WEC at UF, and graduated in 2014.

When I was an undergrad, I went to school for pre-vet, and I thought I wanted to go to veterinary school. I was a college athlete, so I spent all my free time during college doing that. I only had some experience in undergrad working in an animal research lab, looking at innate hypertension in rats.

When I graduated, I figured I’d do some interning or shadowing in a vet office or zoo, because I wanted to do exotic or zoo vet medicine, but there was a 50-mile line to volunteer at any zoo, and they were kind of like “Yeah, volunteers are a dime a dozen.”
Some people recommended that I volunteer with the National Park Service. They work with a lot of animals, so maybe I could get hands-on experience like taking blood samples.

So I started volunteering in Saguaro National Park in Tucson, Arizona, and I really liked all the projects that they did, so I volunteered a lot, and they put me on cooler and cooler projects, so from there I got enough experience to get my first field tech job, and it snowballed from there. 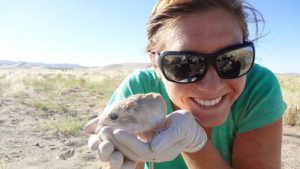 I did work with kangaroo rats and kangaroo mice in central Nevada – and they’re my favorite mostly because they’re just really adorable.

They’re really docile rodents, so you can handle them and they just hop around and sit in your hand.

I’ve handled bear cubs the last two years in a row! I did bear denning logistics. They are just SO adorable. 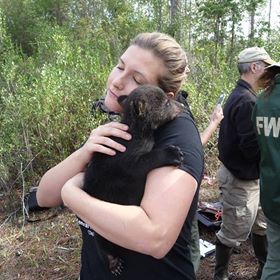 They do this for the bear demographic study in the Panhandle. There is some population data missing up there, and I think a bunch of people got upset about it when we had the bear hunt a couple years ago. That was a big controversy.

They’re doing demographic studies up there to develop a better population estimate. They collar adult females, and track them to their dens.

Then they shoo her away for a little bit, and take the bear cubs out. They take measurements and put expandable collars on them, so you can track them throughout their life and see survival probabilities and know where they go.

They were just precious!

How did you become involved in that?

I do most of their GIS analyses. The GPS collars they wear are real-time collars, so they receive data constantly.

I do all of their home-range metrics, movement metrics, and habitat selection, so the people running the project invited me to go!

I’m very anal-retentive, schedule-oriented, which is kind of interesting because in my personal life I’m a complete disaster—I have no organization at home whatsoever.

When you were working in the field, how did you balance long periods there with your personal life?

I really didn’t have a personal life then!

It was in the midst of a breakup, and work was kind of a nice reprieve. Just focusing on myself, my career, and things that I really wanted to do.

It was a nice retreat from my personal life.

There wasn’t much phone service in central Nevada. We would work three weeks on and one week off, so when I would get some phone service I would call, but often that wasn’t the case. Most of my family and friends understood that. I would get in touch with them when I could, but otherwise it was pretty much just me and the people I was working with.

That was really nice!

I hang out with my fiancé Matt a lot when he’s in town. We have a pretty good circle of friends in Gainesville, since we both went to UF.

When we went to graduate school, we had a great group of friends across the different departments—WEC, SNRE,TCD, biology, forestry, fisheries.

So we hang out with our friends a lot!

We went to the beer fest last weekend, we like to go floating, to movies, to the beach. Matt and I also like to travel a lot—so we do that whenever we can. As if he doesn’t travel enough! (laughs)

I really like the sense of community in Gainesville. It feels like wherever you go people are really connected. I also like the artsy feel. It’s in the middle of Florida, which is a weird state in general, but I think Gainesville has a modern vibe, and it’s really young, with a lot of culture and events going on. And the weather isn’t bad! 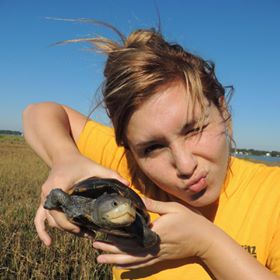 What’s the difference between an alligator and a crocodile?

I don’t read much in my free time anymore, because I spend most of my workday reading scientific papers. So, Stack Exchange, GeoNet. Those are good ones if you’re looking for recommendations. (laughs)

A lot of the people who read this are wildlife undergrads, looking for their next step.

I love working at FWC. I think my position is interesting and unique in that it’s a service position, so I do tasks for almost everybody at the Gainesville office, and some people at other offices around the state. I get to interact with everybody, and that gives it a homey and familial atmosphere.

When I go to work I feel like everybody cares about everybody else, and has each other’s best interests in mind, so it’s not as competitive as other places. Everyone is working together.

As far as advice to get into a wildlife career, I wish somebody had given me a guidebook when I was in undergrad. I had no idea how to get into masters programs or to apply for jobs. I just kind of flailed around for a while.

In my experience, I just did everything by the book. I took the GRE, talked to professors at schools. I ended up getting my graduate assistantship on Texas A&M’s job board. It was advertised as a fully- funded MS. Those are super competitive, so you need pretty decent grades and good references from undergrad, and also good GRE scores. I applied for that because I needed more guidance and direction.

I wasn’t really sure where I wanted to go on this career path, but I knew I at least wanted graduate-level experience, and this seemed like a really fun project. I got along with the adviser (Sam) during the interview. That’s how I got that position, and from there, when I was finishing up my MS, I applied for jobs left, right and center, anything that I could, to close the gap between graduation and eviction.

I got a GIS related position, because I did a lot with GIS in my masters, which lasted a year. Fortunately it was working with an ESRI application, which was relatively new.

Next I interviewed for about ten positions at FWC. The one I got was GIS related, and they really liked that I had that experience.

Everything seemed to be a little bit about who you know and a lot a bit about luck.

There are a lot of different paths you can take to getting into this career, but all of them usually involve starting at the bottom in a place where you’re not getting paid, doing a lot of hard work for free, and then building your way up to the point that you can mostly pay your bills!

How many projects do you tend to be working on for FWC at a time? 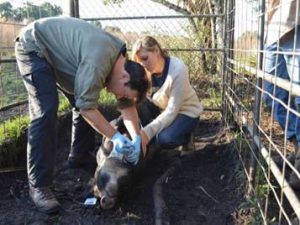 People usually give me a bunch of things, and I have to prioritize by when they need them and how big the project is. It’s cool, because I’m always working on something different and don’t really ever get bored.

Right now, I’m working on a seaside sparrow project, I’m making maps for chronic wasting disease surveillance, and I was working on a habitat selection/niche model for indigo snakes and hognose snakes.

It’s all over the place most of the time!

Also, I think a lot of people don’t know him because he was here a while ago, and he’s a good contact to have!

Matt probably said this in his interview too, but we really love our dog. Shout out to Javi!

Thanks to Brittany Bankovich for sitting down with us.

To learn more about the Florida Fish and Wildlife Conservation Commission, click here.