Caroline Poli is an SNRE PhD student in the Fletcher lab. Her research concerns the snail kites (Rostrhamus sociabilis) of southern Florida.

Survival of Snail Kites from fledging to 1-year is important for growth and recovery of the endangered population in south Florida.

Post-fledging dispersal of juvenile birds is important for future survival and recruitment; however, understanding of the timing and drivers of movement is currently limited. We therefore sought to determine post-fledging movement patterns and factors that influence movement patterns in Snail Kites across the Greater Everglades ecosystem.

We GPS-tracked 14 fledgling Snail Kites across six wetlands, 2016-2017, and found that movement patterns varied substantially within and between individuals, but that birds remained within 900 meters of the nest site for up to 58 days post-fledging. During that time, birds explored surrounding wetlands using occasional foray flights that began and ended at the natal wetland, and were characterized by rapid, moderate-distance movements. After birds departed the natal site and arrived at a new area, movements were highly localized and birds ranged less than 5 km/day.

We further evaluated whether fast, exploratory movements between wetlands were characterized by visual cues such as vegetation,

or transport-related cues such as thermals and wind.

We found that, although visual cues corresponded to movement most frequently, neither visual or transport-related cues explained movement strongly. Given the lack of information about post-fledging movements of Snail Kites, our data will aid in the identification of factors that influence first-year movements and survival, and provide essential information for conservation of Snail Kites across the full-annual-cycle. 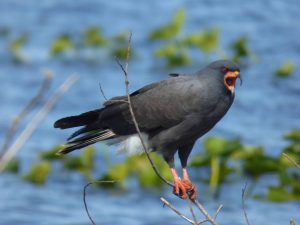