Found in numerous locations in Florida, the Asian green mussel has become an invasive species. An invasive species is those plants and animals that are not native to an area and which have a negative impact on native species, the environment, or human health. Invasive species can also have negative economic impacts due to their interactions with economically important species. Green mussels have the potential to displace local native species such as oysters and other benthic invertebrates. Also, green mussels are a problem for sea going ships, storm-water drains, and the intakes of power plants and other industries. 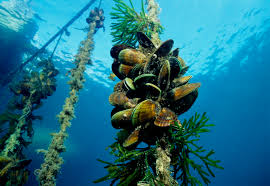 The green mussel is a large mussel, 3-4 inches in length and occasionally reaching 6.5 inches. The shell has a smooth exterior surface which is covered by a thin, organic layer. This layer is generally intact in young mussels but may have patches peeled off in older ones. The color of the organic layer is bright green in juveniles, and brown with green edges when mature. The inner shell surface is smooth and iridescent with a bluish green hue.

Green mussels attach to surfaces using byssal threads which allow the mussels to adhere to surfaces and re-attach themselves if they become dislodged. Reproduction is by spawning followed by external fertilization. The larvae remain swimming in the water column for 2-3 weeks. Green mussels may live as long as three years. 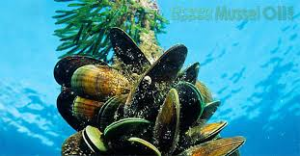 Green mussels are generally found growing on hard surfaces such as rocks, pilings and floating docks and can also be found on sandy or muddy bottoms. They prefer high water flow, at a depth of 1 foot below the tide mark and can tolerate a fairly wide range of salinities and temperatures of 50°-108º F.

Green mussels were first observed in the Caribbean in 1990. Within 10 years,they had been found along the coasts of Venezuela and Jamaica and in Tampa Bay, Florida and since have been found along the Atlantic Coast from Palm Beach County northward. Introductions along the east coast may have been through ballast water or from mussels attached to the hulls of boats and ships. The introduced population at Tampa Bay has expanded considerably since 1999, most likely through local reproduction and settlement.

Green mussels will foul ships, marinas, buoys and power plant intakes. Young green mussels have been clogging the filters of electric power plants and hampering proper operations of the plant. Green mussels may clog crab traps and clam culture bags, making commercial harvest of these native species more difficult. In Tampa Bay, green mussels have displaced some oyster reefs. In some parts of Florida, they have caused a frequency of hull cleanings. These observations suggest that the biological and economic impact of the green mussel introduction to Florida may be considerable.

Green mussels are eaten by native Florida species including blue crabs and sheepshead. However, it is not high enough to substantially reduce or eliminate populations of the mussels.

How Can You Help?

It is important to become aware of the environmental and economic problems that green mussels may cause. Recreational and commercial boaters should be aware that they may grow on the hulls of boats that are kept in the water. Always visually inspect the hull and remove green mussels or any other non-native fouling organisms. Boaters with trailers should drain their bilges and livewells on land.

In waters that are open for shellfish harvest, green mussels may only be legally harvested recreationally with a fishing license or commercial license. Green mussels are known to accumulate toxins and illness-causing problems in other parts of the world. Florida anglers report that they have some success using the meat to fish. The mussel tissue may be better used as chum rather than as bait on a hook.