July 2019 was the Earths warmest month in 139 years of recorded history. With June having been certified as Earth’s warmest June ever ever recorded, and October coming in at the 2nd hottest on record, 2019 as a whole stands to find it’s place within the top five warmest years on record, which would make the five hottest years on record the past five years. What is alarming in this particular circumstance is that it occurred without two usual influences on global climate: solar cycles and a strong El Nino. We are currently within the lowest period of a 100 year solar cycle, and the El Nino event of 2018-2019 was an exceptionally weak one, barely passing the required thresholds. High temperatures impact Florida agriculture in two broad ways: the effects of the heat itself, and the effects of the associated moisture levels. We’ll start with the heat.

Plants aren’t all that different from people in many respects. When a person is stressed, their bodies have a harder time fighting off diseases, even if they’re taking medication. If a person goes fishing on a lake full of mosquitoes, they’re not going to have a good time. If a person doesn’t get a good night’s sleep, they don’t function well at their job the next day. Heat affects plants the same way. This summer I was called for a field visit with a successful watermelon grower whose crop was showing a marked decline just as harvest was beginning. When I arrived, I noted that, while the field had patches of melons with clear signs of powdery mildew, downy mildew, and gummy stem rot, the crop itself was solid. Subsequent lab tests confirmed this. 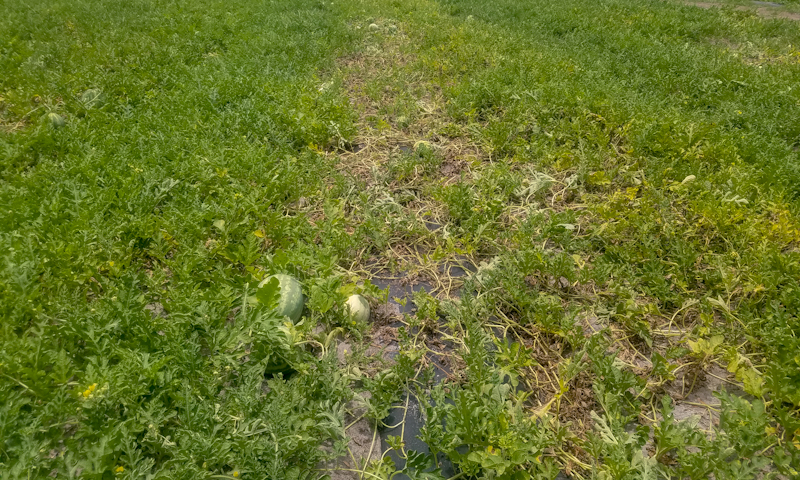 I asked the grower if they had a fungicide rotation program in place, and they did. They were doing everything right and had successfully kept plant damage to a minimum. However, a few weeks before I arrived, disease symptoms and plant collapse began to rapidly affect the field. This shift occurred just as our June heat wave, with successive 97 degree days, was kicking in. Despite fungicide protection, once the plants became affected by strong heat stress, the infections were able to cause damage. Had the grower not already been ready to harvest, their marketable yield would have greatly suffered. Instead, identification of the diseases was necessary to determine just how much attention needed to be focused on cleanup to suppress disease outbreak the following year, a result of the second impact of heat: a lack of winter.

Warm winters may be a boon for the tourism industry, but they can cause long term problems in agriculture. Fungi like downy mildew can survive for a full year in crop residue if environmental conditions are favorable. While there are certainly diseases that take advantage of cool temperatures, cold winters help to suppress many pathogens along with insect populations that may injure plants themselves or vector diseases. Increased disease pressure threatens annuals and perennials alike, but perennials also suffer from a lack of a proper dormancy period. Tree crops need their rest, and if they don’t get it they are unable to wake up in the spring with enough vigor to produce a full crop. A tree crop that is not dormant is also at risk if a snap freeze does occur. Flowers or young fruit that form too early can be wiped out, as what happened with the 2018 Georgia peach crop. At the 2019 UF Stone Fruits Field Day, scientists spoke of the need to reclassify USDA hardiness zones northward as even peaches that require a very short dormancy had been failing to get it in south Florida for years. Some varieties were even being tested for evergreen production, though long-term data is unavailable. Florida will be hit hard by climate change, and we’re going to have to be extremely innovative and resourceful to adapt.