This program began in 2014 as an initiative by the UF/IFAS Indian River Research and Education Center and the UF/IFAS Extension St. Lucie County in collaboration with Extension offices and partner agencies throughout Florida. The focus of the project involved the introduction of a new biological control agent Lilioceris cheni (Coleoptera: Chrysomelidae) and to teach residents how to use the insect to manage the invasive air potato (Dioscorea bulbifera). Floridians struggled to control this invasive vine which can grow up to eight inches per day and smother native vegetation. This UF/IFAS research and extension program was paired with a mass rearing effort and distribution process that helped citizens throughout Florida. Researchers at USDA ARS are credited for discovering L. cheni as a viable biological control agent for air potato.

The Air Potato Biological Control Extension Program was recognized with three national awards and one state award. While UF/IFAS has completed research and extension activities with this project, educational resources will continue to be made available online at http://bcrcl.ifas.ufl.edu/airpotatobiologicalcontrol.shtml. This website features information about insect availability from project partners. Please note that partner agencies may or may not be rearing insects. 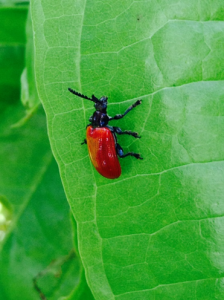